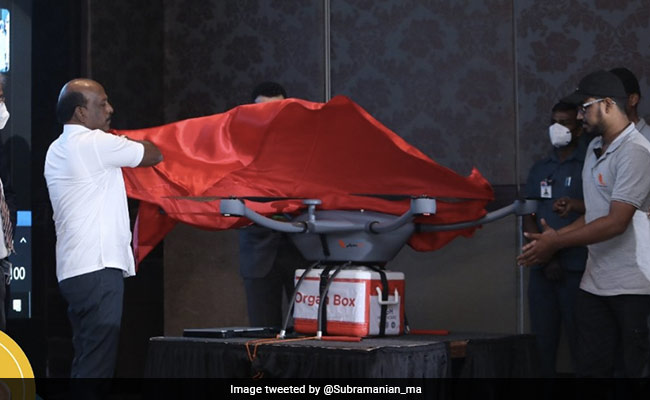 The use of drones in moving harvested organs will reduce considerable time.

The use of drones in moving the harvested organs from the airport to the hospital, as against the present mode of transporting them by road from airport, will reduce considerable time.

“At present, drones can be used to move the box containing the organs up to a distance of 20 km,” Dr Prashanth Rajagopalan, director, MGM Healthcare, which has co-created the prototype drone technology, said.

His hospital has entered into a tie-up with a city-based drone company for shifting the organs, Mr Rajagopalan told reporters. This is aimed at revolutionising the last-mile transportation of organs, he said.

“Understanding the importance of speed and seamless transport of organs we will soon need innovation in the logistics of transportation of organs. And one such welcome suggestion is the use of drones,” Mr Gadkari said.

“This is a very innovative approach to solve the problem of transportation and I appreciate MGM Healthcare in being part of the research and development,” he said after unveiling the prototype, virtually from New Delhi.

Mr Gadkari pointed out that the issue of logistics for organ transportation can be resolved through better land and air connectivity and said his ministry had already initiated measures to improve the infrastructure. Road infrastructure projects like the Bharatmala Pariyojana, a new umbrella programme for highways sector, will be a great asset to transport organs across India.

“We are in the process of starting the expressway project from Delhi to Dehradun, which will reduce travel time… I am very much cautious and sensitive about transportation of organs and how I can be helpful to you on this,” the minister said.

The transport time will be shorter and the expressway will be greenfield alignment and operated with a close door system, he said. Development including land acquisition and other activities are under progress, he added.

The Centre under the leadership of Prime Minister Narendra Modi understood the importance of creating infrastructure not only for promoting business and trade but also in terms of saving lives and improving healthcare, he claimed.

Felicitating Dr K R Balakrishnan, Chairman, Cardiac Sciences, and Director, Institute of Heart and Lung Transplant and Mechanical Circulatory Support, MGM Healthcare; and his team for having performed over 500 heart and lung transplants successfully in India and running the largest adult and paediatric heart transplant program in India, Mr Gadkari said achieving this landmark puts India on the global map.

“This achievement not only gives a sense of pride but also a satisfaction that we are creating a benchmark in the healthcare sector,” he said.

Incidentally, the record 500-plus heart and lung transplants is the highest number performed by one team in the entire Asia Pacific region, according to the hospital.

“I was told that some of the doctors, especially Balakrishnan, relocated to India from abroad with a mission and passion of creating a finest transplant programme. This is indeed an exceptional commitment to serve the nation,” the Union minister said lauding the members of the hospital team for their sacrifice.

Congratulating the team for the success, he urged them to expand the horizons and not stop at crossing the 500-mark. “Reach the next milestone of progress through talent and improvement of medical infrastructure in villages and smaller towns and help the masses access world-class medicare,” he urged.

State Health Minister Ma Subramanian commended the prototype and said this would pave the way for more lives to be saved. He assured all support to make it operational soon.

“Chennai and MGM Healthcare is a frontrunner in the organ transplant programme and is at par with the very best in the world today,” he said.

For its part, the government has permitted all state-run medical college hospitals and district headquarters hospitals to harvest organs. “Soon, these hospitals would start transplants,” Mr Subramanian said.

Dr Balakrishnan said 514 heart and lung transplants were successfully completed and this included over 200 transplants over the last two years despite lockdowns and COVID-19.

“This was possible due to the tremendous support and expertise of the team, government bodies and transport teams,” he said.