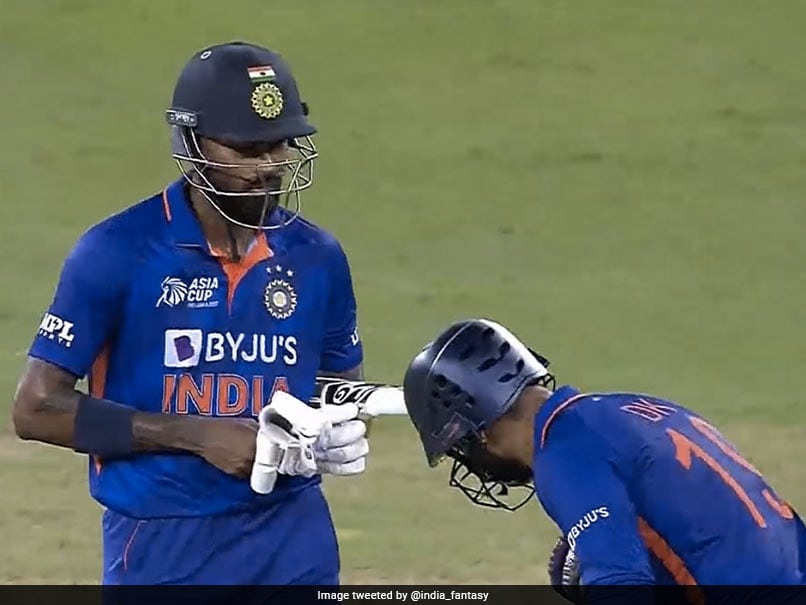 India vs Pakistan: Dinesh Karthik bows to Hardik Pandya after the latter hit the winning runs

Hardik Pandya produced an innings for the ages as he scored an unbeaten 33 off 17 deliveries to guide India to a tense win over Pakistan in the team’s tournament opener in Asia Cup 2022 in Dubai on Sunday. Coming in to bat in a tricky situation, Hardik put India’s chase back on track along with Ravindra Jadeja and produced three crucial boundaries in the penultimate over bowled by Haris Rauf to take India to the doorsteps of victory.

But things weren’t easy as left-arm spinner Mohammad Nawaz clean bowled Jadeja on the first delivery of the final over and the match moved towards a thilling finale as India needed 6 runs off 3 balls with Hardik on strike.

It was at this point that Pandya produced a monster hit as his flat-batted shot cleared the ropes and India won the match by 5 wickets.

What was the moment of last ball, that Hardik Pandya hit six…🥳🎉✌ pic.twitter.com/lD5xBLETKf

What followed was an epic reaction from wicket-keeper batter Dinesh Karthik, who bowed in front of Hardik after the winning shot.

It was a day to remember for Hardik, who also broke the back of Pakistan’s batting by picking up three crucial wickets in the middle order, which allowed India to restrict the arch rivals to a below par total of 147.