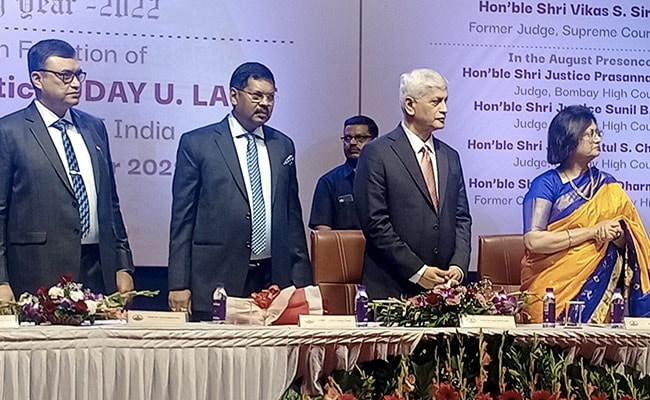 Chief Justice of India UU Lalit today got teary-eyed while reminiscing about the time he spent in Nagpur at the beginning of his career as a lawyer. Speaking at a felicitation function organised for him by the High Court Bar Association, he promised to do everything to the best of his knowledge and ability during his tenure as the Chief Justice of India.

Stating that he was feeling nostalgic while speaking in Nagpur where he started his journey with law, the Chief Justice of India referred to a poem by Rudyard Kipling and said, “Life is a journey you undertake and it makes one emotional that it is not what you have covered but it is how you cover that.”

Getting teary-eyed at this point, Chief Justice Lalit took a few moments to compose himself.

“I have just one promise to make…I will do everything to the best of my knowledge and ability,” he said.

He had fond memories of Nagpur, Chief Justice Lalit said, adding he was fortunate to have come from a family of lawyers.

He also thanked his wife for standing by him like the “Rock of Gibraltar” and said they shared a unique bond where she would understand him even before he said anything.

Supreme Court judge Justice Bhushan Gavai, who too practised in Nagpur as a lawyer, also spoke on the occasion.

He convened a full court meeting of all the judges of the Supreme Court within a couple of hours of taking charge and came out with solutions for challenging problems such as pendency of old matters, Justice Gavai said.

As many as 106 old matters pending for 10 to 12 years were decided within four days, he noted.

When they met for the first time in March 2021 in Delhi, Chief Justice Lalit walked in and said “Sir, How are you?” Justice Datta recalled, adding, “Let me be very frank, I have been never approached by a Supreme Court Judge like this, calling me Sir.”

Though Chief Justice Lalit’s tenure would be short, it has not deterred him from taking major steps to bring about reforms in the Supreme Court, Justice Datta said.

Chief Justice Lalit took oath as the 49th Chief Justice of India last week and will hold office till November 8.