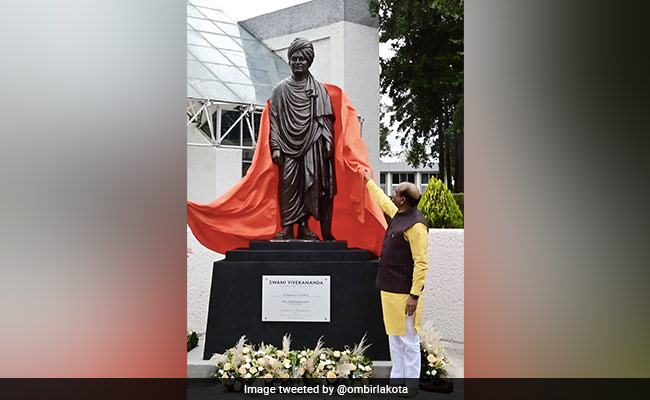 Om Birla said Vivekananda’s teachings have inspired people not only in India but across the world.

Lok Sabha Speaker Om Birla on Saturday unveiled the first statue of Swami Vivekananda in Latin America at a university in Mexico, according to an official statement.

Unveiling the statue at the Autonomous University of State of Hidalgo in Mexico, he said the teachings and personality of Vivekananda have inspired people not only in India but across the world, according to the Lok Sabha Secretariat statement.

He also referred to the Vivekananda’s address to the 1893 World’s Parliament of Religions in Chicago and said he had beautifully displayed the characteristics of Indian culture in his speech.

In a series of tweets later, Om Birla said, “Swami-ji’s message & teachings to the humanity transcend geographical barriers & time. His message is for the entire humanity. Today, by unveiling his bust in Mexico, we are paying our humble tributes to him (sic).”

“Honoured to unveil a Statue of Swami Vivekananda in Mexico. This is the first statue of Swami-ji in Latin America. The statue will be a source of inspiration for people, especially for the youth of the region, to strive & bring the change which will take their country to new prime,” he said.