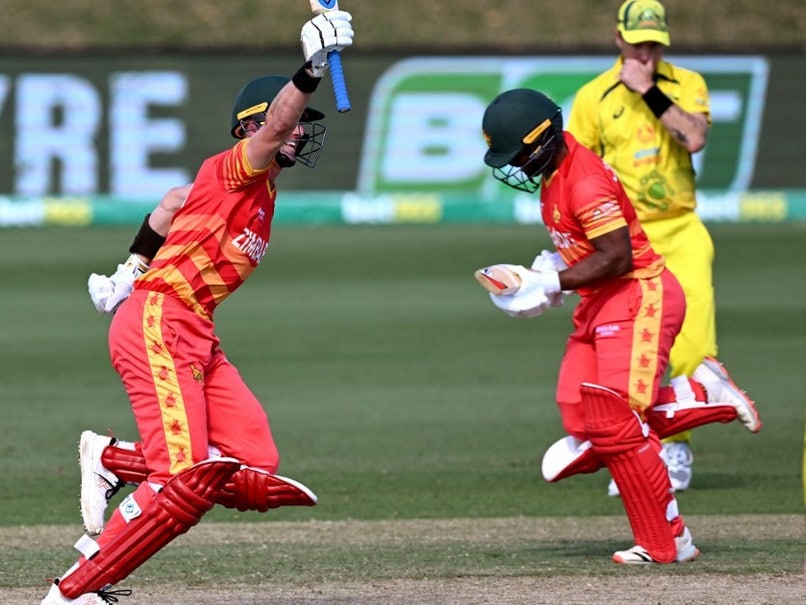 As Brad Evans drove Mitchell Starc through covers for a single, he brought up a historic moment for Zimbabwe as they registered their first ever win against Australia in Australia in any format. After bowling Australia out for 141 in the 3rd ODI at the Riverway Stadium in Townsville, Zimbabwe chased down the total in the 39th over with three wickets to spare. As Evans hit the winning shot, he had his arms up in the air before he even completed the run, while there were hugs all around in the Zimbabwe dugout.

“We showed a whole lot of fight… it was a testament to the work the boys put in,” said Zimbabwe skipper Regis Chakabva, who top-scored with a composed 37 not out.

A nervous Zimbabwe, seeking just their third victory against Australia from 32 ODIs, batted defensively and slumped to 77-5 after Murumani (35) fell to towering all-rounder Cameron Green.

Chakabva calmed the nerves and was joined by an inspired Burl, who hit a six off player-of-the-series Adam Zampa to get Zimbabwe within sight of a famous victory.

He fell with five runs needed but there was no late twist.

“You turn up to international sport and you can get beaten on any day, and we saw that today,” said Australia captain Aaron Finch.

“They were relentless with the ball early on.”

Zimbabwe bowled out Australia for the first time in ODIs and the eventual triumph fuelled their bid to climb the ODI Super League ladder, which goes towards qualification for next year’s 50-over World Cup in India.