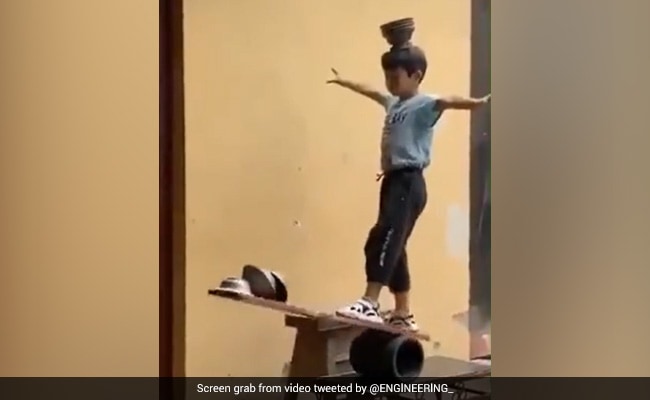 The video has garnered around 1.7 million views and over 57,000 likes.

Shared on Twitter just a few days back, the clip has already garnered around 1.7 million views and over 57,000 likes. The video shows an adorable little kid skillfully stacking bowls atop his head while balancing on a wooden board and barrel.

What the video below:

In the video, the little boy is seen standing on the plank which is kept on a cylindrical object. The kid has several bowls placed on his head. A few bowls are also kept on the wooden plank on which the boy is standing.

The little kid manages to stack the bowls kept on the wooden board atop his head by tossing them in the air. The bowls symmetrically land on the bowls that were already on the child’s head.

This remarkable video has left netizens stunned. They praised the kid’s talent and mind-blowing balance.

One user wrote, “Even after many centuries of progress in AI and robotics, the most advanced humanoid robot will be unable to perform such tasks. The constitution of a human being is simply a miracle.” Another said, “It’s not that hard once you learn the trick to it.”

“Bravo,” commented third, while a fourth added, “Ah hell nah, this kid doing more in his childhood than most of us have in our entire lives.”

Meanwhile, speaking of exceptional talent, earlier this month a video of a boy performing multiple stunts including front and back flips and even pulling off a 360-flip had taken the internet by storm. Shared by Anand Mahindra, the clip highlighted the ability of the boy, which prompted internet users to praise the talented kid.