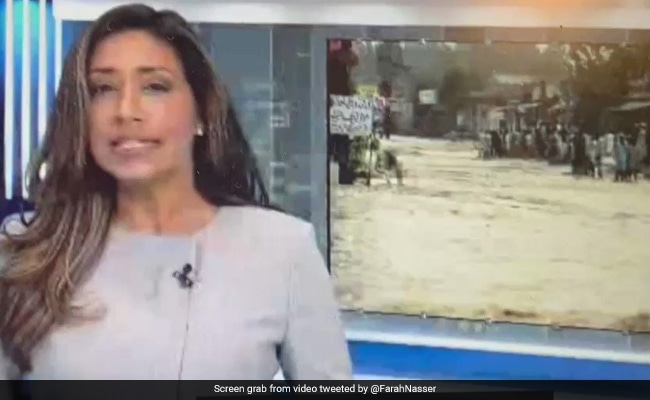 Everyone need a good laugh once in a while, and that’s what a Toronto-based journalist did after she swallowed a fly live on air. Farah Nasser, a host on Canada’s Global News accidently swallowed the insect, but she wasn’t irked about it. “Sharing because we all need a laugh these days,” the news presenter said on Twitter, sharing a clip of the moment. “I swallowed a fly on air today.” The video has 99.4K views and over 1,600 likes.

During the live broadcast, Ms Nasser was talking about flooding in Pakistan when the ‘fly invasion’ took place. “Very much a first world problem given the story I’m introducing,” she said. After a frown on her face and little bit of throat clearing, the news presenter bounced right back as if nothing happened.

During the broadcast, Ms Nasser was telling the viewers, “Pakistan has never seen an unbroken cycle of monsoons quite like this. Eight weeks of non-stop torrential rain. A national emergency has been ‘invoked’.” She took a brief pause while saying the word Invoked.

Sharing because we all need a laugh these days. Turns out it’s not just @fordnation, I swallowed a fly on air today.

(Very much a first world problem given the story I’m introducing). pic.twitter.com/Qx5YyAeQed

Soon after the journalist dropped the video on social media, netizens said that she handled the situation like a pro and praised her. A user wrote, “I knew something was BUGGING me about your coverage of that story but I didn’t have time to INSECT it further. You handled it like a pro, especially since you were LARVE on TV,” another user wrote, “And yet, your delivery remained flyless.”  Third user wrote, “Good job holding it together!!”

Ms Nasser in an interview with ET Canada said, “I’m so glad it gave people a laugh! We could all use one these days. Viewers and colleagues have been kind with their praise but I’m sure they would have done the same. The news must go on. As for the fly, I hope it lived a good life.” She added, “I am contemplating trying out for ‘Survivor’.”