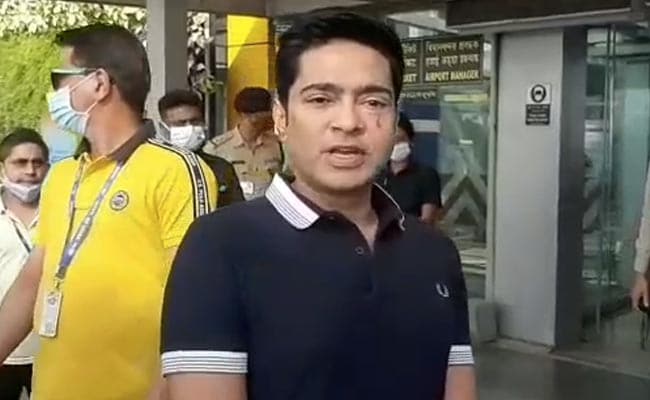 Abhishek Banerjee, the nephew of West Bengal Chief Minister Mamata Banerjee and the National General Secretary of Trinamool Congress, today launched a scathing attack on Union Home Minister Amit Shah and the BJP after he was questioned by the Enforcement Directorate (ED) officials in Kolkata for almost eight hours as part of the coal smuggling probe. “BJP claims that the leader of another party is a ‘Pappu‘. But in reality, Amit Shah himself is the biggest ‘Pappu‘. He just cannot do politics without using (Central) agencies,” he said.

Holding Mr Shah directly responsible for coal and cattle smuggling in Bengal, Mr Banerjee alleged: “CISF (Central Industrial Security Force) is linked to the coal scam. What was the BSF (Border Security Force) doing when cattle smuggling took place at the border? This is not a cow-trafficking corruption, it is Home Minister corruption. Union Minister of State for Home Nishith Pramanik himself is a cow thief. Investigation of cow theft is being done by cow thieves.”

Speaking to mediapersons after his questioning, Mr Banerjee said:  “If anyone can prove that I have taken even five paisa illegally, I’m ready to be hanged. I am ready to face questioning 30 times and I’m ready to bow before the people of Bengal, but will never bow before BJP,” he added.

This is the third time that Mr Banerjee has been questioned by ED. The Central Bureau of Investigation (CBI) had filed a chargesheet in July this year against 41 persons involved in the coal scam, though Mr Banerjee was not named in it.

Taking a swipe at the Union Home Minister, whose son Jay Shah, the Secretary of the Board of Control for Cricket in India, was accused by opposition parties of “refusing to wave the flag” based on a video after India beat Pakistan in an Asia Cup match in Dubai last Sunday, Mr Banerjee said: “Let him (Amit Shah) first teach patriotism to his son before he tries to teach patriotism to the people of Bengal. If he thinks he will scare me by unleashing the ED and CBI on me, because I had criticised his son, he is mistaken.” Mr Banerjee added: “They have questioned my wife and myself seven times so far, but the result is zero. Yet, BJP leaders who were caught on camera taking bribes have never been summoned by the Central agencies.”

Mr Banerjee also alleged that BJP’s Suvendu Adhikari, Leader of the Opposition in Bengal Assembly, has been in touch with one of the accused in the coal scam who is now missing. He claimed he had an audio clip to prove his case, which he would submit in court.

As Mr Banerjee arrived at the Central Government Offices (CGO) Complex in Salt Lake at 10.30 am, Trinamool Congress launched an offensive on social media, sharing clips of Prime Minister Narendra Modi complaining about the misuse of central investigative agencies when he was the Chief Minister of Gujarat.

The Trinamool Congress has alleged that fearing the groundswell of support for the party in Bengal, BJP is using Central agencies to harass leaders of the ruling party and wrest power. Speaking at the foundation day ceremony of the party’s students’ wing on August 29, the Bengal Chief Minister had alleged: “In Maharashtra, they brought down the government. Who gave the money? Where did it come from? Where is the CBI? Where is the ED? They tried to break the government in Jharkhand also. I stopped those MLAs here in Bengal.” Ms Banerjee further said: “Abhishek Banerjee has given a fantastic speech today. I hope they (ED) don’t serve him a notice tomorrow. They had earlier issued notices to him and even his wife. Now they may issue a notice to their two-year-old daughter also.”