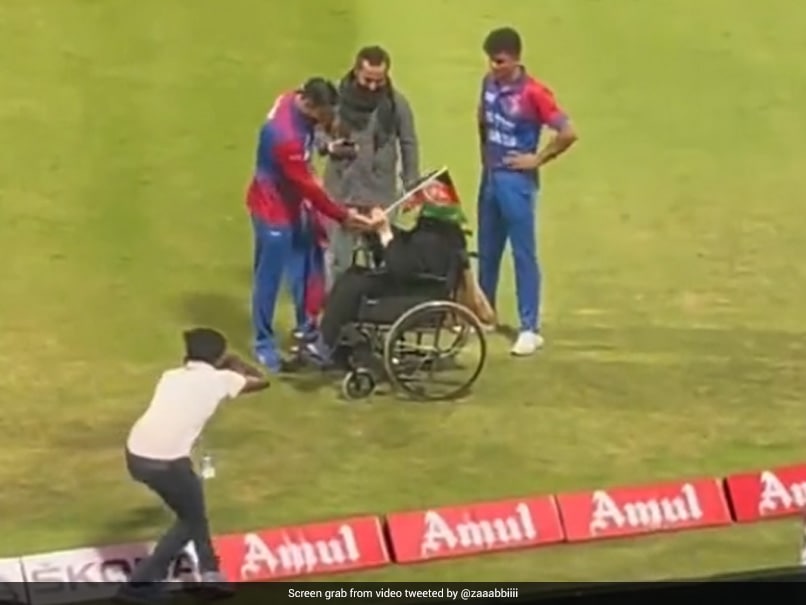 Bangladesh vs Afghanistan: Mohammad Nabi meets an old fan on wheelchair after the match.

Afghanistan players had a great time in the middle on Tuesday as they beat Bangladesh to enter the Super-4 stage of the ongoing Asia Cup. While spinners Mujeeb Ur Rahman and Rashid Khan shone in the in the first innings of the match, Najibullah Zadran and Ibrahim Zadran stole the show in the second half. Afghanistan stopped Bangladesh at 127 for 7 and their chase, which seemed like a tight contest at one stage, was made a one-sided affair by the Zadran duo as they together stitched unbeaten 69 runs for the fourth wicket to seal victory for Afghanistan.

Not only during the game but the Afghanistan players also won hearts off the field. A video is now viral on social media in which Afghanistan skipper Mohammad Nabi could be seen making a heartfelt gesture towards an old fan on wheelchair.

The video is from Afghanistan’s 2022 Asia Cup match against Bangladesh that took place on Tuesday.

Just found the most beautiful videopic.twitter.com/E8Rh8nErq8

Talking about the match, Mujeeb returned figures of 3 for 16 and Rashid Khan claimed 3 for 22 as Afghanistan restricted Bangladesh to a low total of 127 for 7. Mujeeb set the tone for Afghanistan by striking thrice before Rashid capitalized on it to put Bangladesh in serious trouble. However, Mosaddek Hossain‘s unbeaten knock of 48 off 31 balls took Bangladesh to a fighting total.

In reply, Afghanistan did not have a good start and they kept losing wickets at regular intervals till the 13th over. After that Najibullah and Ibrahim steadied the Afghan ship before the former went berserk towards the end and ripped apart Bangladesh bowling.

The win saw Afghanistan comfortably advancing to the Super-4 stage as the side had also stunned Sri Lanka by 8 wickets in the tournament’s opening game. They had bundled out Sri Lanka for 105 runs and then reached home in 10.1 overs.