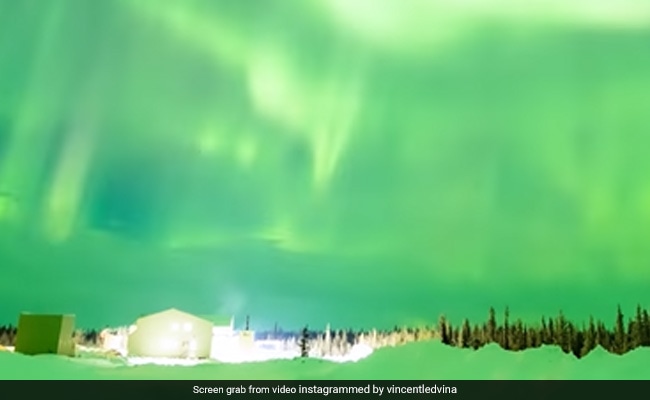 Picture shows an explosion of the aurora making the sky full of green waves.

You must have come across videos of various natural phenomenon on social media. These amazing videos makes you imagine the beauty and magic of nature. One such video is making rounds on the internet that shows an explosion of aurora.

Shared by a user named Vincent Ledvina on Instagram six days ago, the video shows a magnificent sight of an explosion of aurora in Alaska, the United States. “Aurora explosion in Alaska! Can’t wait to go back,” reads the caption.

According to his Instagram bio, Mr Ledvina is a scientist and calls himself as ‘The Aurora Guy’. He also studies space weather and is an expert at finding green skies.

The video begins with a text super that reads, “This is what I mean when I say the aurora can “explode”. On a count of three, the video shows an explosion of the aurora making the sky full of green waves. The reflection of the green light everywhere can be seen making the view more magnificent.”

“The aurora was so strong that it overexposed my camera. It was so green to the naked eye, too. The explosion is actually called a substorm, which is where the aurora brightens for a brief period of time and extends equatorward. Substorms go through three phases: expansion, breakup and recovery,” the text super further explains.

Since being shared, the video has amassed over 3.2 million views and more than 3.4 lakh likes on Instagram. It also received a barrage of comments and questions about the phenomenon and the places where it can be seen.

“Its my dream to see an Aurora with my own eyes someday… BTW one question, do these Auroras appear as bright as they seem in the videos or somewhat like the stars where you can only see them if there’s no light pollution?” one user asked.

Another asked, “Where would you consider the best place to travel to see the lights? Like place with the highest chance.”