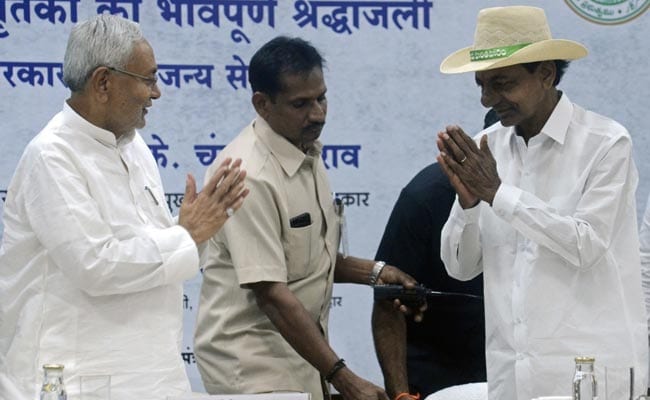 Deputy Chief Minister Tejashwi Prasad Yadav was among those present on the occasion.

Bihar Chief Minister Nitish Kumar on Wednesday lashed out at the Narendra Modi government at the Centre and criticised its “excessive prachaar-prasaar” (publicity) besides its alleged lack of sensitivity towards the needs of the states.

Addressing a function here alongside K Chandrasekhar Rao, his Telangana counterpart, Mr Kumar took a veiled dig at BJP, which has undertaken an aggressive campaign to expand its base in the southern state.

“Your adversaries speak a lot against you. Little do they realise what stuff you are made of. You were the one whose single-minded struggle led to the creation of Telangana. The people will never desert you”, Mr Kumar, the de facto leader of the JD(U), said. His teaming with ‘KCR’, as Mr Rao is popularly called, is being seen as an important step in the direction of achieving opposition unity.

Mr Kumar’s speech was preceded by KCR giving cheques of Rs 10 lakh each to five soldiers from the state who were killed in the stand-off with Chinese troops in Galwan valley of Ladakh in 2020.

The Telangana Chief Minister, who heads the Telangana Rastra Samiti, also gave away cheques of Rs five lakh each to family members of 12 migrant labourers from Bihar who died in a fire in Hyderabad in March.

“Your gesture of paying ex-gratia to the dead soldiers is exemplary. They did not die in your state, but in a far-off place. It is truly magnanimous,” said Mr Kumar, who recently dumped BJP, joined the multi-party ‘Mahagathbandhan’, and formed a new government.

In his brief speech in Hindi, KCR referred to Bihar as being the land of ‘kranti’ (revolution) and said his home state was the land of Godavari river, called the ‘Ganges of the south’ while the holy river itself flowed through the eastern province.

Mr Kumar, who made the concluding remarks, expressed anguish over the Narendra Modi government’s stout refusal to accept his plea for giving special category status to Bihar.

“The special status could have helped us develop faster…I have now left them (BJP-led government). The old times were different as Atal ji (Atl Bihari Vajpayee) used to treat others with respect. Now there is no work, only prachaar and prasaar”, said Mr Kumar, who severed his ties with the BJP accusing it of trying to break his party.

“All states are suffering under the current dispensation. States’ share in revenue is declining”, alleged Mr Kumar.

Deputy Chief Minister Tejashwi Prasad Yadav was among those present on the occasion.