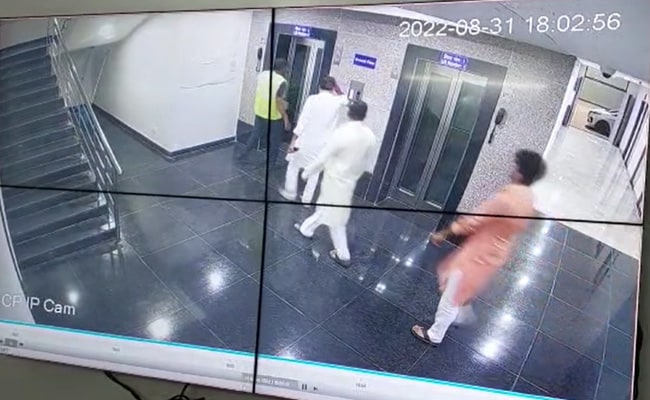 BJP MPs Nishikant Dubey and Manoj Tiwari, with others, at the Deoghar airport on August 31. (CCTV grab)

Sedition and conspiracy charges have now entered the row over BJP MPs allegedly forcing a take-off clearance for their chartered plane at Jharkhand’s Deoghar airport.

Nishikant Dubey, Lok Sabha member from Godda, today filed a police case against the local Deputy Commissioner, Manjunath Bhajantri, under Section 124A (sedition) and others under the Indian Penal Code. Mr Dubey and the IAS officer earlier had a tiff on Twitter. By the evening, the MP filed a ‘Zero FIR’ in Delhi that’ll be transferred to the local police in Jharkhand.

The row has political context, too.

It comes when Chief Minister Hemant Soren is staring at disqualification for allegedly awarding a mining lease to himself, and his party, Jharkhand Mukti Morcha, says it’s part of a larger BJP game to topple the government.

MP Nishikant Dubey is seen as a key BJP leader in all of this. He has been demanding mid-term polls “on moral grounds”.

As for the Deogarh airport incident on August 31 — parts of it were caught on security cameras — Mr Dubey and fellow MP Manoj Tiwari are among nine people who allegedly barged into the Air Traffic Control (ATC) area for flight clearance past sunset, even though the airport yet to be cleared for night operations.

MP Dubey justified his family members having entered the area, saying that they were “bringing my slippers” as he’d walked in barefoot.

The MPs and the seven others were all charged with criminal trespass and putting lives in danger, police said, on a complaint by the airport security in-charge, Suman Anan.

This sparked a heated exchange on Twitter in which Mr Dubey called the district’s head bureaucrat, Deputy Commissioner Bhajantri, a “chamcha” (lackey) of the Chief Minister. The officer, meanwhile, wrote to the Principal Secretary, Cabinet Coordination (Civil Aviation), Jharkhand, about the takeoff. And the MP, in turn, wrote to the district police chief, accusing the bureaucrat of obstructing his work.

Now, the MP’s FIR against the officer has IPC Sections 353 (obstructing public servant), besides 448 (trespass), 201 (destroying evidence), 506 (criminal intimidation), and 120B (criminal conspiracy), besides the Official Secrets Act.