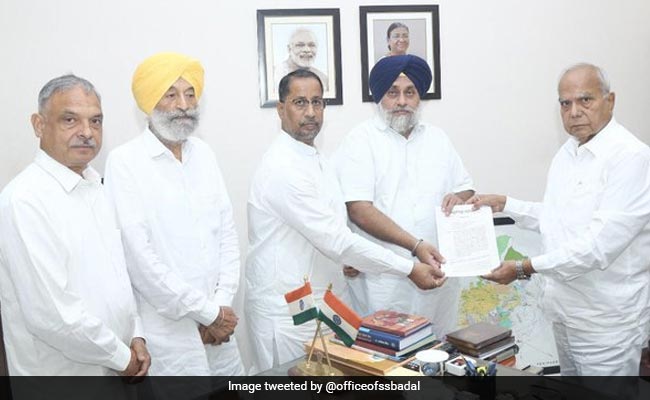 The Shiromani Akali Dal today submitted a memorandum to Punjab Governor Banwarilal Purohit seeking a probe by the CBI and ED into the “Rs 500 crore scam in the state’s excise policy”.

The AAP government in Punjab framed the “tailor-made” excise policy in line with the one in Delhi which had been found “illegal” and under the CBI scanner, SAD chief Sukhbir Singh Badal said after submitting the memorandum to the governor.

In July, Delhi Lieutenant Governor VK Saxena recommended a CBI probe into the alleged irregularities in the implementation of the Excise Policy 2021-22. Following this, the AAP-led Delhi government withdrew the new liquor policy.

On August 19, the CBI raided 31 locations, including Deputy Chief Minister Manish Sisodia’s residence, over alleged irregularities in the implementation of the Delhi Excise Policy 2021-22.

“Like in Delhi, a similar scam has taken place in Punjab. It is a scam of Rs 500 crore,” Mr Badal alleged.

“We have requested the governor to order probes by the Central Bureau of Investigation and the Enforcement Directorate into the excise policy scam in Punjab,” he said.

He claimed the AAP government in Punjab followed the “Delhi Model” while framing the state’s excise policy and some senior Punjab officials had held a meeting with Mr Sisodia for framing the policy.