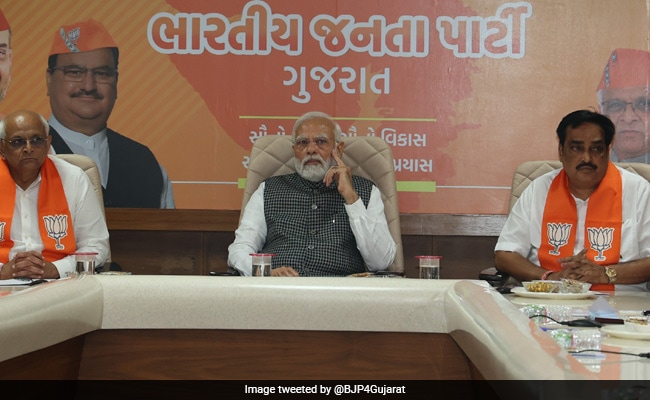 The Prime Minister wrapped up the visit to his home state and headed to Delhi.

Prime Minister Modi, who had been on a two-day visit to Gujarat since Saturday, held the meeting at the Bharatiya Janata Party’s (BJP) state headquarters ‘Shree Kamalam’, he said.

After attending the party meeting, the Prime Minister wrapped up the visit to his home state and headed to Delhi.

The meeting, which went on for nearly one-and-a-half hours, assumes significance as Assembly elections are expected to be held in December this year.

The prime minister’s meeting at the BJP’s state headquarters was not part of his official itinerary and it was planned later, Press Trust of India reported, quoting sources as saying.

After taking part in Suzuki Motor Corporation’s event at Mahatma Mandir on Sunday evening, Modi reached Shree Kamalam to chair the core committee meeting, after which he left for the national capital.

However, he did not reveal the details as to what exactly transpired at the meeting.

“While the CM shared the pro-people work being done by his government, Paatil briefed the PM about various organisational aspects of the party. Other members also shared anecdotes about how people are getting various benefits under the BJP rule. The PM expressed happiness on the work being done by both – the government and party in the state,” Vaghani told reporters.