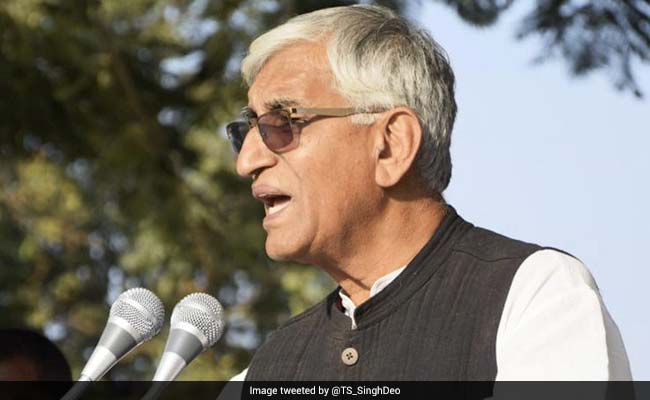 Chhattisgarh health minister TS Singh Deo’s gaffe while describing the financial condition of the state in a video has left the Bhupesh Baghel government embarrassed while the opposition BJP alleged “financial mismanagement” and hurled “Mr Bantadhar” (spoilsport) jibe at the Chief Minister.

In the video, TS Singh Deo can be heard saying the state government has no “aukat” (status) to hike allowances of the protesting employees as it had already given Rs 40,000 crore to them.

Facing flak, Mr Singh Deo expressed regret for the “mistake” in choosing the word and said the BJP should cooperate with the Chhattisgarh government by asking the Central government to release the funds it owes to the state in the interest of the people.

More than 4 lakh employees and officials of the state government have been on an indefinite strike since August 22 demanding a 34 per cent dearness allowance (DA), a hike of six per cent in the existing DA proportion, and the house rent allowance (HRA) as per the 7th pay commission’s recommendations.

The state government on August 16 announced a 6 per cent hike in DA for government employees, taking it to 28 per cent.

On Saturday, a delegation of the protesting employees met Mr Singh Deo at his residence in Ambikapur in the Surguja district and submitted a memorandum of demands, an official in his office said.

In the video, which has gone viral, employees can be heard asking the minister to hike the DA. To this, Mr Singh Deo replied that since there is no money (with the government) how can the employees be given (the additional hike)?

“I can understand what you (employees) are saying but there is no money. Honestly speaking the government has no ‘aukat’ to give Rs 5,000-Rs 6,000 crore extra to you as of today. The government is already giving Rs 40,000 crore to you,” the minister told the delegation.

When employees further said that the states which are not financially sound compared to Chhattisgarh are also giving the 34 per cent DA, the minister replied, “Here ‘narva ghurva and garwa’ (referring to the Baghel government’s ambitious scheme centred on rivulet, cow, compost pit, and vegetable garden) have become too much. Farmers are on the priority list. Then, there is regularisation (of contractual employees) which is in the pipeline”.

Bharatiya Janata Party (BJP) national vice president and former chief minister Raman Singh on Sunday tweeted Mr Singh Deo’s video with a comment, “A minister in Congress government is himself saying that his government doesn’t have ‘aukat’ to give money. The mismanagement of Bhupesh Baghel has made Chhattisgarh bankrupt and debt-ridden”.

“Neither there is money to pay salaries to employees, nor to fulfill promises of its (Congress) manifesto. Bhupesh Baghel is ‘Mr Bantadhar’ (spoilsport) of Chhattisgarh,” Raman Singh said in the tweet in Hindi.

Mr Singh Deo re-tweeted Raman Singh’s post and wrote, “I have made a big mistake in the selection of words for which I express regret. But the financial non-cooperation of the Central government with Chhattisgarh has been hindering the state government’s capacity to increase its spending.”

He alleged that the Centre has not been releasing the pending funds worth more than Rs 20,000 crore to Chhattisgarh.

“Please cooperate (by asking the Centre to release the pending funds) in the interest of people of the state,” Mr Singh Deo tweeted.

The senior Congress leader, locked in a turf war with Chief Minister Baghel, had last month relinquished the Panchayat and Rural Development ministry, one of the four portfolios held by him.