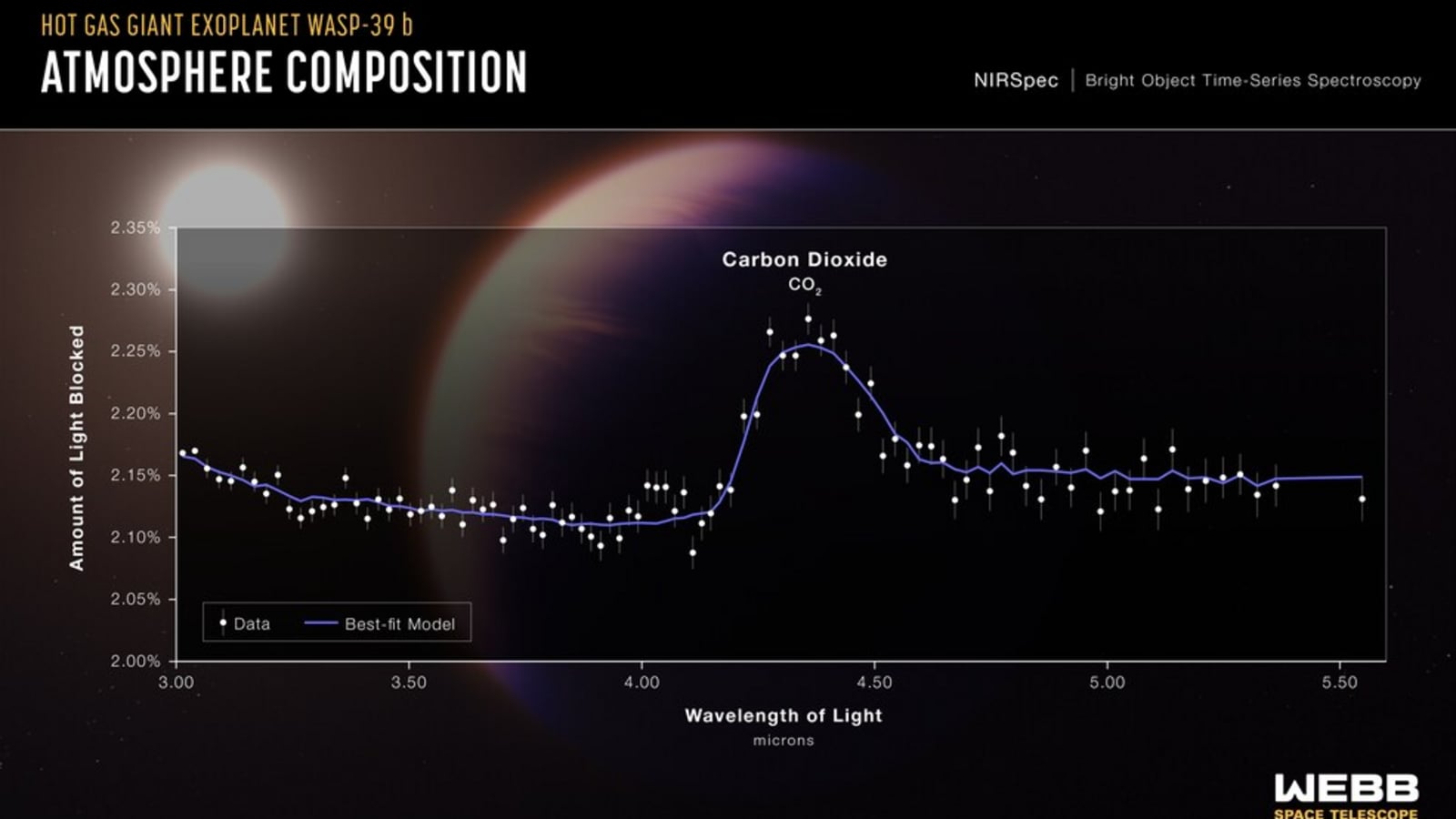 NASA’s James Webb Space Telescope has captured the first clear evidence of carbon dioxide (CO2) in the atmosphere of a planet outside of our solar system. Here is all you need to know.

Earth’s atmosphere is made up of mainly three gases, namely nitrogen, oxygen and carbon dioxide. But now, evidence has been found for the existence of carbon dioxide in the atmosphere of a planet outside the solar system. The evidence has been captured by Nasa’s James Webb Space Telescope. Informing about the same, NASA Webb Telescope tweeted, “Catch your breath — Webb has captured the first clear evidence of carbon dioxide (CO2) in the atmosphere of a planet outside of our solar system! WASP-39 B is a gas giant closely orbiting a Sun-like star 700 light years away.”

This observation of a gas giant planet orbiting a Sun-like star 700 light-years away provides important insights into the composition and formation of the planet. The finding, accepted for publication in Nature, offers evidence that in the future Webb may be able to detect and measure carbon dioxide in the thinner atmospheres of smaller rocky planets, NASA informed.

According to NASA, WASP-39 B is a hot gas giant with a mass roughly one-quarter that of Jupiter (about the same as Saturn) and a diameter 1.3 times greater than Jupiter. Its extreme puffiness is related in part to its high temperature (about 1,600 degrees Fahrenheit or 900 degrees Celsius). Unlike the cooler, more compact gas giants in our solar system, WASP-39 B orbits very close to its star – only about one-eighth the distance between the Sun and Mercury – completing one circuit in just over four Earth-days.

The planet’s discovery, reported in 2011, was made based on ground-based detections of the subtle, periodic dimming of light from its host star as the planet transits, or passes in front of the star.

Previous observations from other telescopes, including NASA’s Hubble and Spitzer space telescopes, revealed the presence of water vapor, sodium, and potassium in the planet’s atmosphere. And now with the help of Webb telescope, the presence of carbon dioxide has been confirmed on this planet as well.

“Transiting planets like WASP-39 B, whose orbits we observe edge-on rather than from above, can provide researchers with ideal opportunities to probe planetary atmospheres. During a transit, some of the starlight is eclipsed by the planet completely (causing the overall dimming) and some is transmitted through the planet’s atmosphere,” NASA said in a report.

Because different gases absorb different combinations of colors, researchers can analyze small differences in brightness of the transmitted light across a spectrum of wavelengths to determine exactly what an atmosphere is made of. With its combination of inflated atmosphere and frequent transits, WASP-39 B is an ideal target for transmission spectroscopy.

The research team used Webb’s Near-Infrared Spectrograph (NIRSpec) for its observations of WASP-39 B. In the resulting spectrum of the exoplanet’s atmosphere, a small hill between 4.1 and 4.6 microns presents the first clear, detailed evidence for carbon dioxide ever detected in a planet outside the solar system.

“No observatory has ever measured such subtle differences in brightness of so many individual colors across the 3 to 5.5-micron range in an exoplanet transmission spectrum before. Access to this part of the spectrum is crucial for measuring abundances of gases like water and methane, as well as carbon dioxide, which are thought to exist in many different types of exoplanets,” NASA said.

Understanding the composition of a planet’s atmosphere is important because it tells something about the origin of the planet and how it evolved.