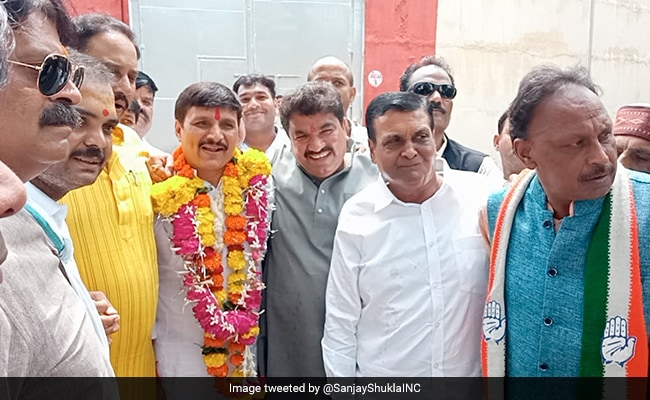 He was released on bail on Wednesday.

Supporters of a Congress corporator, accused of attempting to kill a BJP functionary, gave him a milk bath and welcomed him by beating drums after he was released on bail from a jail here in Madhya Pradesh.

Some photographs of the welcome accorded to Indore corporator Raju Bhadoria went viral on social media on Wednesday, following which the ruling BJP in MP claimed the opposition Congress was glorifying a person accused of a serious offence and indulging in criminalisation of politics.

According to police officials, Mr Bhadoria was arrested on July 13 this year from Kota in Rajasthan on charge of attempt to kill rival BJP candidate Chandurao Shinde on July 6 during the Indore civic polls.

He was released on bail on Wednesday.

After Mr Bhadoria came out of a local jail, his supporters took out a procession along with music and drum beats and gave him a milk bath, which the BJP criticised.

Madhya Pradesh BJP spokesperson Umesh Sharma claimed that “by organising such events and glorifying an accused in a serious case, the Congress is indulging in criminalisation of politics.”

However, state Congress secretary Neelabh Shukla claimed a false FIR was registered against Mr Bhadoria at the behest of the BJP.

Mr Shukla further claimed that Mr Bhadoria was not present at the spot during the alleged attack on Shinde.

Mr Bhadoria was declared elected in the civic election from ward no. 22 on July 17, when he was in jail.