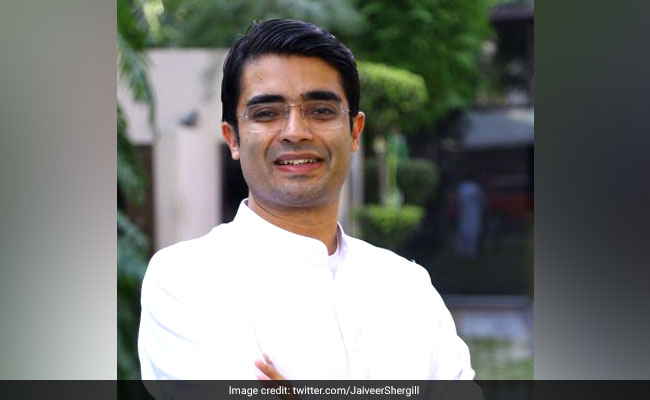 Jaiveer Shergill, a lawyer, is among the prominent young faces of the party.

Congress leader Jaiveer Shergill resigned today with sharp jabs at the Gandhis in a letter that said the “vision of the party’s decision-makers is no longer in sync” with the aspirations of the youth. All three Gandhis had denied him a meeting for over a year, he told reporters, adding that he had “severed all ties” with the party.

“The decision-making of the Congress party is not in sync with the ground reality anymore. I’ve been seeking time from Rahul Gandhi, Sonia Gandhi & Priyanka Gandhi Vadra for more than a year, but we are not welcomed in the office,” Jaiveer Shergill said.

“In the past eight years, I have not taken anything from the Congress, only poured into the party. Today when I’m being pushed to bow down before people because they’re close to the top leadership – this isn’t acceptable to me,” he was quoted as saying by news agency ANI.

Mr Shergill said sycophancy is “eating the Congress like ‘termites'”.

The primary reason for his move, he said in a resignation letter to Sonia Gandhi, was that the ideology and the vision of the current decision-makers of the Congress is no longer in sync with the aspirations of the youth and modern India.

“Furthermore, it pains me to say that decision-making is no longer for the interest of the public and the country. Rather, it is influenced by the self-serving interests of individuals indulging in sycophancy and consistently ignoring on ground reality. This is something I cannot morally accept or continue to work with,” Mr Shergill wrote.

The 39-year-old lawyer was among the youngest and most prominent spokespersons of the Congress. He had not been seen at the party’s media briefings for a while.

His resignation is the third this month after two veterans, Ghulam Nabi Azad and Anand Sharma, quit party posts in their home states. Both leaders are part of the “G-23” or group of 23 rebels who wrote to Sonia Gandhi in 2020 calling for an overhaul of the organization along with “full-time and visible leadership.”

The Congress has lost several leaders while struggling with election defeats and an organisational drift over the past few years. An exodus started in 2020 with the exit of Jyotiraditya Scindia, who is now a Union Minister, and UP minister Jitin Prasada. This year, former Union Ministers Kapil Sibal, Ashwani Kumar and RPN Singh quit the party.