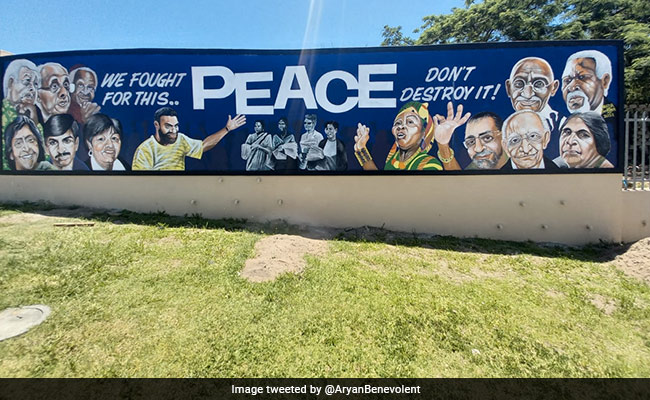 The mural was unveiled at the Aryan Benevolent Home in Chatsworth, South Africa.

A huge wall mural of images of Mahatma Gandhi, Nelson Mandela, Desmond Tutu, Ahmed Kathrada and a host of other South African leaders, both dead and still alive, has been unveiled at the Aryan Benevolent Home in the sprawling mainly Indian township of Chatsworth.

Celebrated Indian-origin artist Nanda Soobben spent more than a month painting the mural after the violence in South Africa last year as an exercise to show the solidarity between different communities in South Africa which brought about the democratic order in 1994 after decades of white-minority apartheid rule.

“The aim of the painting (unveiled on Friday) is to bring about peace and a non-racial society following the unrest, without the allegations spread on social media that inflamed such violence. It is to bring about social cohesion and show that different races in South Africa made great sacrifices to free our country of apartheid,” Mr Soobben said.

“Besides being peace murals, I also wanted them to be history lessons on a wall. Hopefully, the images will encourage those who see them to go and read up more on these great leaders of our past and present,” Mr Soobben said of the mural at the Aryan Benevolent Home (ABH), a non-profit organisation, in Durban’s Chatsworth.

He recalled how a mural he had painted in New York almost three decades ago had spurred him to do something similar in South Africa.

Mr Soobben had to go abroad to further his career as an artist and cartoonist before he returned to South Africa to start the Centre for Fine Art Animation and Design in 1994 after Nelson Mandela became the president.

He had a number of challenges earlier with the regime due to his outspoken but widely appreciated anti-apartheid cartoons in leading newspapers.

The Centre has assisted scores of previously disadvantaged young artists in developing their passion for a range of skills, from design to animation, using the latest technology.

Mr Soobben said he chose the ABH for the first mural because of the excellent work that it does in looking after orphaned children and the aged.

The late Dr Sishupal Rambaros, who founded the ABH with others 101 years ago, was himself an orphan cared for at the fledgling institution and spent his entire life there. He is one of the people featured on the mural.

Others include former UN Human Rights Commissioner Navi Pillay; South Africa’s first Nobel Peace Prize winner the late Albert Luthuli; the women who participated in the historic march on the seat of government at the Union Buildings in Pretoria in 1956; and the late freedom fighters Prof Fatima Meer and Lenny Naidu; Dr Imtiaz Sooliman, founder of the internationally-renowned aid organisation Gift of the Givers; and the late Prof Fatima Meer.

Naren Pattundeen, the CEO of ABH, said they were honoured and appreciated Mr Soobben choosing the Home as the first venue in his campaign to promote peace.

Gcina Mhlophe, celebrated South African storyteller, poet, playwright and author, who also appears on the mural, was a speaker at the launch.

Mhlope lamented the fact that Indian children have largely forgotten their mother tongues which their forefathers brought to South Africa as she recalled how, during a visit to a local school on International Mother Tongue Day, she found children who were proud of their languages like isiZulu and isiXhosa, but the Indian children could not speak Hindi, Urdu, Gujarati, or Telugu.