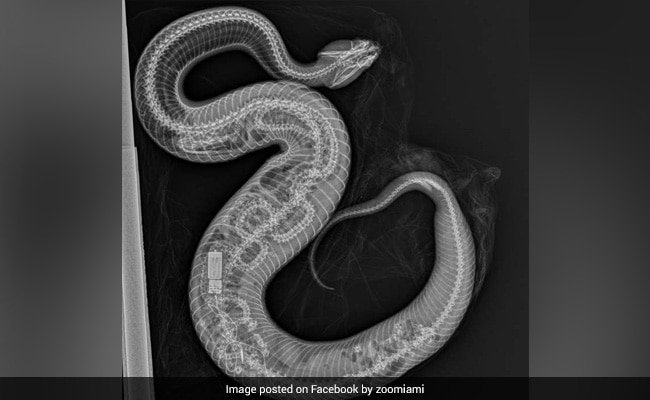 An X-ray image of the snake’s belly was posted by Miami Zoo on Facebook.

A python with a tracker was eaten by a cottonmouth snake in Florida. The Miami Zoo recently made the surprising discovery while trying to locate the tracker. It posted the X-ray of the interior of the snake’s belly with the python inside on Facebook. The image shows the tracking transmitter that was installed on the spine of the python. The tracker allows zoo staff to study the movements of the snake and control them. The X-ray also shows that the Burmese python was eaten tail-first by the native snake.

“You may have heard in the news about the bobcat that was documented stealing and consuming eggs from an invasive Burmese python in the Everglades. But, that isn’t the only native species that is fighting back! A python that had its tracking transmitter implanted by surgeons at Zoo Miami was recently found to be consumed by another snake; a native cottonmouth, also known as a water moccasin. You can see the spine and the transmitter of the python inside of the cottonmouth on this x-ray, or radiograph, that was taken at Zoo Miami’s animal hospital,” the Miami Zoo said in the Facebook post.

The cottonmouth snake was 43-inch-long and it ate the 39-inch Burmese python.

Newsweek reached out to the zoo, which referred to the incident as the native species “fighting back” against the invasive python.

Facebook users were stunned after seeing the photographs. “Florida native species built different” one user commented. “Look at this craziness!” said another.

The Burmese python is a large non-venomous species considered invasive in Florida. They are found in Everglades ecosystem and have been damaging the wetland ecosystem for decades.

Earlier this month, the Florida Fish and Wildlife Conservation Commission hosted a challenge to hunt the Burmese pythons in which hundreds of people took part.