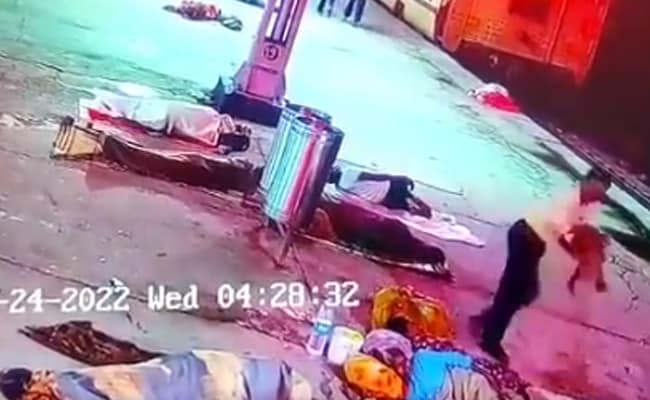 Video grab from CCTV footage showing the child being taken away.

A seven-month-old boy stolen from next to his sleeping parents at the Mathura railway station last week has been found 100 km away, from a BJP corporator’s house in Firozabad, cracking a racket that steals and sells such children, police said.

BJP’s Vinita Agarwal and her husband had allegedly bought the boy for Rs 1.8 lakh from two doctors, who were part of a larger gang, as they wanted a son. The couple already has a daughter.

In all eight people have been arrested, including the man who was caught on a security camera when he picked up the child from the platform.

Visuals from a press conference organised by the railway police in Mathura showed cops handing over the child to his mother, and everyone smiling for the camera. Another visual had wads of 500-rupee notes that the police seized from the arrested doctors.

In a detailed statement, senior police officer Mohammed Mushtaq said said the kidnapping was carried out by a gang involved in trafficking for money.

“We found that a man named Deep Kumar took the child. He is part of a gang that includes two doctors who run a hospital in the neighboring Hathras district. Some other health workers are involved too. We interrogated the people in whose home the child was found, and they told us they had only one daughter, so wanted a son. That’s why they made the deal,” Mr Mushtaq said in a statement to journalists.

No reaction was yet received from the arrested corporator’s side or from the BJP.

Footage of the incident, from the night of August 23, shows a man appearing to pass by the child, who is sleeping with his mother. Moments later, he comes back and scoops the child up and makes a dash. The CCTV camera captured him running towards a train stationed on the platform.