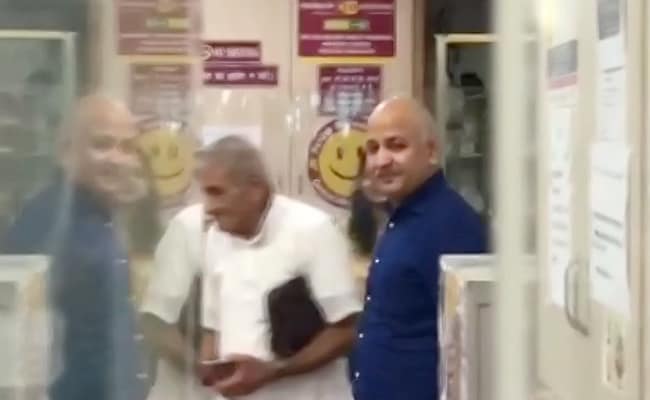 Delhi’s Deputy Chief Minister Manish Sisodia reached a Ghaziabad bank today for the Central Bureau of Investigation’s (CBI) search of his locker in connection with its probe into alleged irregularities in the capital’s now-withdrawn liquor policy.

Mr Sisodia, whose home was raided nearly two weeks ago, had said yesterday that “nothing will be found” in his locker. “Tomorrow, CBI will raid our bank locker. Nothing was found in the 14-hour raid at my house on August 19. Nothing will be found in the locker either. Welcome to CBI. My family and I will fully cooperate in the investigation,” he tweeted in Hindi yesterday.

Mr Sisodia, who also handles Delhi government’s excise portfolio, is among the 15 accused named in the FIR filed by the CBI in the liquor policy case.

The CBI has contended that the new policy was introduced without the permission of Delhi’s then Lieutenant Governor Anil Baijal. It also says many ineligible vendors were awarded licences by the Delhi government in exchange for bribes. The policy, introduced in November last year, was withdrawn eight months later amid allegations of corruption.

The ruling Aam Aadmi Party (AAP) has rejected all allegations of irregularities in its policy. Mr Sisodia has said it was implemented with complete transparency and has alleged that the BJP raised the issue to counter AAP leader Arvind Kejriwal’s political challenge. “These people are not concerned about the scam. Their worry is Arvind Kejriwal [the Chief Minister of Delhi], who is loved by the masses and has emerged as a national option,” he said following the raids at him home.

Over the past couple of weeks, the AAP has come all out against the BJP, accusing it of offering bribes to MLAs to switch over in an attempt to topple the government in Delhi.

In order to prove that all AAP MLAs are committed to the party, Arvind Kejriwal has said he will take a test of majority in Delhi Assembly. The Chief Minister, in a blistering attack against the BJP, said yesterday that the party is using taxpayers’ money to fund to bribe legislators and toppled elected state governments led by Opposition parties.

BJP’s national president JP Nadda has accused the AAP of trying to divert the subject without responding to the allegations against its government.