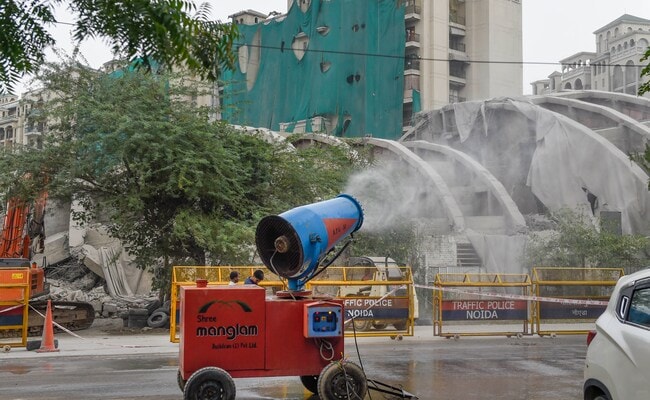 A smog gun at work near the site a day after the Noida twin towers demolition.

Work to clean the debris is in full swing in the two nearby residential societies and roads around the now-demolished Supertech twin towers, Noida Authority CEO Ritu Maheshwari has said, even as sudden rains last evening brought hope for a quick respite from dust.

While Emerald Court would take one more day to be cleaned, the work at ATS Village could extend up to seven days due to more rubble and dust on the premises, according to officials.

“About 500 workers and machinery which include 100 water tankers, 22 anti-smog guns, six sweeping machines, etc have been installed around the now-demolished twin towers area to complete the cleaning work inside and outside ATS Village and Emerald Court societies at the earliest and mitigate dust-related issues,” Ms Maheshwari said after a site visit.

Noida Authority officers have been instructed for the extensive cleaning work in the societies, she said.

The Noida Authority said residents of Emerald Court have sought one more day for cleaning work on their premises and that has been accepted.

“In ATS Village, the cleaning work would take about seven days,” it said.

Around 5,000 residents of the two societies — closest to the twin towers — were evacuated for the day ahead of the 2.30 pm explosion on Sunday that brought down the towers in just 12 seconds along with thousands of tonnes of debris and clouds of dust that spread in the nearby areas.

While locals rejoiced over the sudden rains on Monday evening after a dry spell, officials said the showers would definitely be helpful.

“No doubt the rainfall will be very effective in checking the dust around the twin towers area. While water sprinklers and anti-smog guns have been deployed there since Sunday evening, there remain some areas, like terraces of towers, etc, where dust settles.

“The rains would even clean up those areas and also have an effect on the debris site,” Regional Officer, Uttar Pradesh Pollution Control Board, Praveen Kumar told PTI.

Around 50 per cent residents of Emerald Court and 75 per cent of ATS Village had returned to their homes in Sector 93A by Monday.

They were allowed to return from 7 PM onwards Sunday after safety clearance from an inspection team that included officials of Edifice Engineering, Jet Demolitions, Central Building and Research Institute (CBRI) and Noida Authority.

Ms Maheshwari said cleaning activities like washing and sweeping, which had started Sunday evening itself, were continuing in full swing and a large number of workers and officials were on the job.

“Water was being sprinkled on trees and plants in the two societies and nearby areas that got covered by dust in the wake of the demolition, while roads were also being washed, ” she said.

She said electricity, domestic gas and water supplies were restored soon after the inspections post demolition.

“The supplies are running normal and no malfunction has been observed by our officials till now. We are keeping a close eye on all the supply lines,” the senior IAS officer said.

Meanwhile, police personnel remained deployed at a road stretch in front of the now-demolished twin towers.

The stretch has been barricaded for a fortnight now for security reasons. While the twin towers are gone now, several people tried to reach close to the huge mounds of debris to take pictures and videos on Monday.