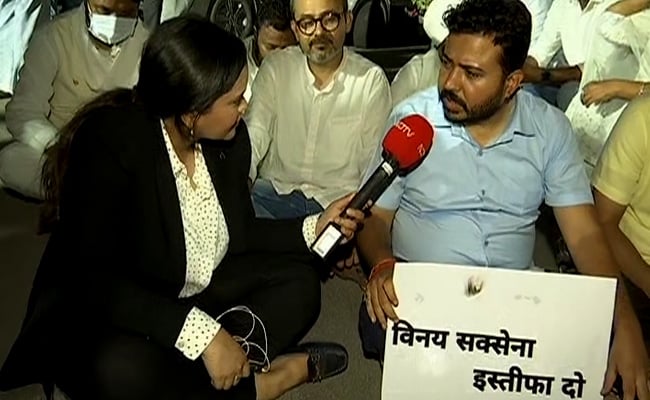 The AAP had earlier accused the LG of “interfering” in the city government’s work.

The Delhi assembly premises are witnessing a unique night, with both the ruling Aam Aadmi Party and Opposition BJP on overnight vigils accusing each other of corruption.

AAP legislators have alleged that Delhi Lieutenant Governor Vinai Kumar Saxena had pressurised his employees to exchange demonetised notes worth Rs 1,400 crore in 2016 when he was Khadi and Village Industries Commission Chairman.

BJP MLAs are demanding the sacking of ministers Manish Sisodia and Satyendar Jain over alleged corruption.

Soon after AAP accused the Delhi LG of laundering money during demonetisation, BJP in a press conference hit back, saying it’s a deflection to avoid answers on the alleged corruption in the liquor policy and construction of Delhi schools.

VK Saxena had recently recommended a CBI probe into alleged corruption in the implementation of the Delhi Excise Policy 2021-22. The AAP had accused him of “interfering” in the city government’s work.

The AAP MLAs have squatted near the Mahatma Gandhi statue, while BJP MLAs started their sit-in near the statues of Bhagat Singh, Raj Guru and Sukhdev inside the assembly premises.

AAP MLAs were seen singing songs, raising slogans and holding placards demanding action against the LG. They say PM Modi was aware of the alleged corruption by the LG, but still appointed him to the post.

The cashiers working at KVIC had written to the Prime Minister’s office clearly stating that Mr Saxena has pressurised them into exchanging demonetised notes worth crores, they alleged.

In a statement by the BJP, Leader of Opposition Ramvir Singh Bidhuri said the party MLAs have been forced to sit on the dharna since they were not heard in the assembly.

All eight MLAs of the BJP were not part of the proceedings of the Delhi Assembly’s special session on Monday and Friday as they were marshalled out of the House.

The BJP also came out in VK Saxena’s defence and said AAP leaders are levelling corruption allegations against him “to take revenge”.

Based on the LG’s recommendations, the CBI had registered an FIR in connection with the alleged irregularities in the formulation and implementation of the Delhi government’s Excise Policy 2021-22.

The agency also raided the residence of Mr Sisodia, who also holds the excise portfolio and is an accused in the case.

Last week, VK Saxena sought a report from the Chief Secretary over a delay of more than two-and-a-half years in acting on a Central Vigilance Commission (CVC) report on an inquiry into the construction of additional classrooms in Delhi government schools.