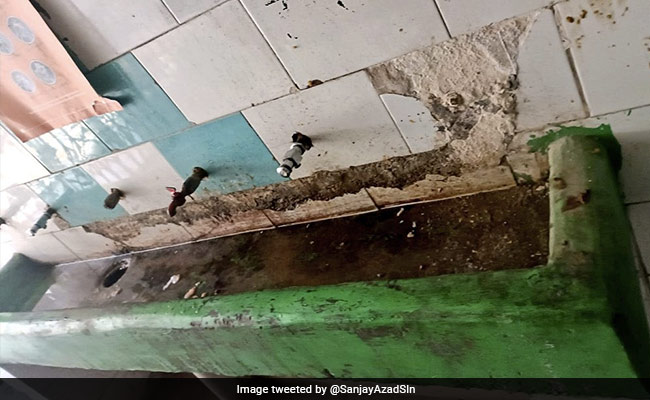 The BJP should apologise for playing with the future of Delhi, said Manish Sisodia.

Aam Aadmi Party (AAP) MLAs visited some schools run by the Municipal Corporation of Delhi on Saturday and highlighted their “poor condition” to corner the BJP which has been targeting the Arvind Kejriwal government over alleged irregularities in the construction of its schools.

The AAP legislators, including its chief spokesperson Saurabh Bharadwaj, livestreamed their visit to the schools on social media platforms, highlighting “poor condition” of their buildings, classrooms, toilets and campuses, and slammed the BJP for raising questions on the Delhi government’s expenditure on the construction of its schools.

The unified Municipal Corporation of Delhi (MCD) functions under the BJP-led Centre. Before unification, the BJP ruled the three municipal corporations of Delhi.

“BJP has given such schools and education system to poor children while being in power at the MCD for 17 years. The BJP should apologise for playing with the future of Delhi and the country like this,” Delhi Deputy Chief Minister Manish Sisodia said in a tweet in Hindi after AAP MP Sanjay Singh posted some pictures of “unhygienic” toilets and “dirty” premises of an MCD school on the microblogging site.

In the pictures posted by Mr Singh on Twitter, students can be seen sitting on mats in a classroom.

Mr Bharadwaj visited a civic body-run school in the Greater Kailash area and claimed one teacher was teaching students of two different classes in one classroom. “This is the situation here in every classroom because the school has just two teachers and a principal to teach children enrolled in prep to standard 5 classes,” he said.

“How can one teacher teach students of two different classes?” the AAP leader asked.

Showing the ceiling of a classroom, Mr Bharadwaj said, “Imagine what would be the condition of children studying here under this tin ceiling during Delhi’s scorching summer.”

“Children here are not getting proper facilities that they need. These children also deserve what the children of Delhi government schools are getting. I appeal to Delhi government to do something for them if MCD is not able to do anything,” he said.

AAP MLA Durgesh Pathak visited an MCD-run school in his Rajinder Nagar assembly constituency and said he was not allowed to enter its premises.

“I came to visit this school in Inderpuri but you can see its main gate is locked. I was told that I don’t have permission to enter its premises. Some parents have also come here along with me but they are too not being allowed to enter and meet their wards,” he said.

Holding a press conference later, Mr Pathak alleged that the principals of some schools had been instructed by “some officials” at the behest of the BJP not to allow any AAP MLAs, any leader of any political party or the media enter the school premises and make videos.

He also ran an audio clip in which a man is heard giving such instructions but refused to identify the person. “BJP is running away from showing its schools because there is nothing worth showing there. The BJP knows it will be exposed if it allows anyone to visit its schools,” he charged.