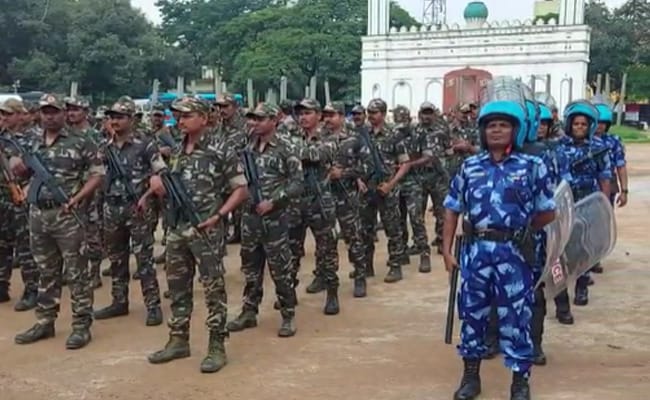 Police have made tight security arrangements in and around Eidgah ground.

Chamarajpet Idgah ground here is actually a “public property” and the legal fight over its ownership will continue in the courts, Karnataka Revenue Minister R Ashoka said on Tuesday, following the Supreme Court refusing to grant permission for Ganesh Chaturthi celebrations there, and ordering status quo.

He said the government will abide by the court order.

“People of Chamarajpet and Bengaluru were eager to celebrate Ganesha festival at the ground, but the Supreme Court has ordered status quo. We will fight legally in the courts, in the days to come,” Mr Ashoka said.

The ground is currently under the control of the state Revenue Department.

The Supreme Court on Tuesday refused to grant permission for Ganesh Chaturthi celebrations at Eidgah ground and ordered status quo on land by both parties.

A three-judge bench headed by Justice Indira Banerjee asked the parties to approach the Karnataka High Court for the resolution of the dispute.

The top court was hearing an appeal filed by the Karnataka Waqf Board challenging the order of the High Court.

A division bench of the Karnataka High Court on August 26 permitted the state government to consider and pass appropriate orders on the applications received by the Deputy Commissioner of Bengaluru (Urban) seeking the use of Eidgah ground at Chamarajpet.

Chamarajpet Nagarikara Okkoota Vedike, a citizens’ forum, that wanted to organise the festival at the ground said they will abide by the order, but will fight the ownership issue legally.

However, Karnataka State Board of Auqaf Chairman Moulana Shafi Saadi in New Delhi said, the Supreme Court order is a welcome one, as it doesn’t allow attempts to disturb Hindu-Muslim unity, because of Chamrajpet Eidgah ground issue.

“The Supreme Court has upheld the Places of Worship Act of 1991 and has ordered status quo…I want to tell Hindu brothers that Karnataka’s Muslims are not against Ganesha festival celebrations, Islam does not preach opposing other’s religious practices,” he said, maintaining that Eidgah is a Waqf property where Muslims have performed Namaz for 200 years.

Police have made tight security arrangements in and around Eidgah ground at Chamarajpet, ahead of the Supreme Court hearing the matter today, and had even held a “route march”.

A Division Bench of the High Court of Karnataka on August 26 had modified an interim order of a single judge bench on the Chamrajpet Eidgah playground dispute, saying religious and cultural activities can be allowed by the government there, but for a limited period from August 31.

Earlier, the court on August 25 had ordered that the two-acre land should be used only as a playground and Muslims should be allowed to pray there on only two festivals — Bakrid and Ramzan — till the case was disposed of.

The Joint Commissioner (west) of the Bruhat Bengaluru Mahanagara Palike (BBMP) had recently ruled that the property belonged to the Revenue Department following the civic body’s Chief Commissioner’s directions to verify the ownership of the land.

However, the Karnataka State Board of AUQAF and District Waqf Officer, Bengaluru challenged the order of the Joint Commissioner before the Single Judge of the HC.

The original property dispute dates back to 1955 and the Supreme Court had ruled in favour of the Waqf in 1965.

The decades-old dispute over Eidgah Maidan had once again come to the fore earlier this year, when some Hindu outfits sought BBMP’s permission to hold events there.

This resulted in two contrary sets of documents emerging — the Karnataka State Board of Auqaf presented a 1965 gazette notifying the land as Wakf property and the 1974 City Survey records and all other civic records thereafter showed the land to be a playground.

However, the State Revenue Department organised the Independence Day event and an assistant commissioner-rank official hoisted the flag on August 15 for the first time at the Eidgah ground.