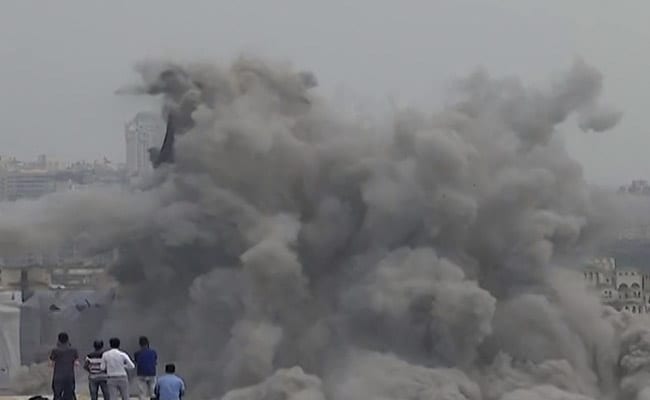 The Supertech Twin Towers in Noida were demolished at 2.30 pm on Sunday

The PM 10 and PM 2.5 levels that spiked drastically near the Supertech twin towers following their demolition returned close to usual levels on Monday, official data showed.

The biggest spike in PM 10 and PM 2.5 levels was recorded at Parsvnath Prestige society near the now-demolished twin towers in Sector 93A followed by the City Park and the Barat Ghar in Gejha village.

Data from Uttar Pradesh Pollution Control Board (UPPCB) showed that for the 2 pm to 10 pm period on Sunday, the PM 10 level in Parsvanth Prestige had spiked to 676 while it was 81 on Saturday and 137 on Monday.

The demolition took place at 2.30 pm on Sunday.

On Monday, a day after the demolition, the PM 2.5 figure at Parsvnath Prestige was 53, City Park 47 and Barat Ghar 40, according to the data.

“The pollutant level around the twin towers demolition site has been more or less similar to the level of ambient air quality as observed in other parts of Delhi-NCR. The rain on Monday evening has been effective,” UPPCB’s Regional Officer Praveen Kumar told PTI.