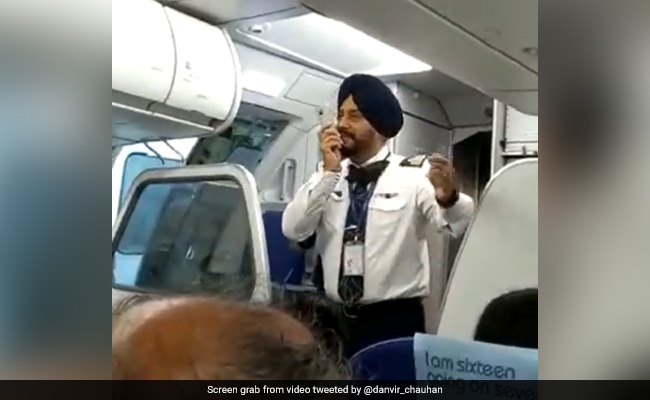 The video garnered over 35,000 views and thousands of likes.

A video shared on Twitter showed the IndiGo pilot speaking on the microphone and welcoming people. “Some tips by the Captain in a Punjabi English mix to passengers on flight Bangalore to Chandigarh,” read the caption of the post.

Some tips by the Captain in a Punjabi English mix to passengers on flight Bangalore to Chandigarh. pic.twitter.com/7V3dQ9PUdO

At first, the pilot was heard speaking in English. He said that during the flight, while passengers sitting on the left side would be able to show off their photography skills, people sitting on the right would meanwhile see Hyderabad.

He then switched to Punjabi and said that later, passengers on left would see Jaipur, while the other side would be able to see Bhopal.

The pilot hilariously added that people sitting on the aisle seat can only turn left and right and look at each other. This left passengers in splits. “Lesson learnt is what? Take a window seat,” the captain jokingly added.

He then went on to give a special mention to all passengers from defence, para-military and veterans onboard. He even urged people to keep their masks on and remain seated until the plane lands in Chandigarh.

“Your luggage is safe. Till the time the doors don’t open, kindly remain seated. Luggage is totally safe with you,” the pilot stated.

Since being shared, the video of the flight announcement has taken the internet by storm. It has garnered over 35,000 views and thousands of likes.

While one user wrote, “Wow! salute the soldier sailor and his martial lineage,” another said, “Took so many flights to Chandigarh n never got this Captain!!! Kya fayda?”

A third added, “excellent! we need more of these jovial addresses. Most don’t bother to listen to the standard mugged-up announcements.” “Superb and beautifully done.. I’d love to be on his flight,” commented fourth.