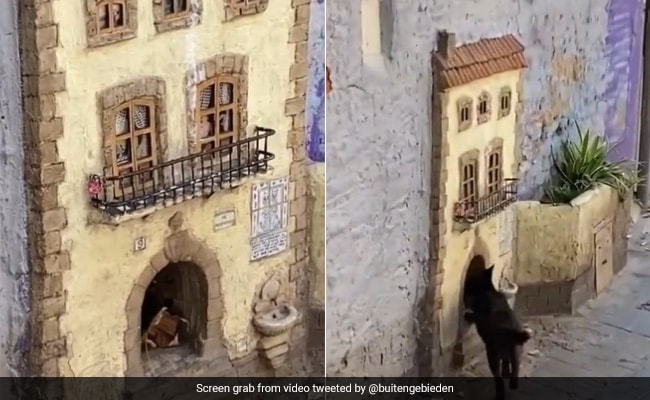 Picture shows a kitten entering its beautiful house on street.

Internet is full of content showing adorable antics of animals that are undoubtedly loved by the viewers. There are videos that show people making lovely houses for their pets. One such video has surfaced on the internet that shows a kitten going inside its beautiful house.

Shared by Buitengebieden on Twitter on Tuesday, the video begins with a kitten strolling through a street before it unexpectedly entering a tiny, lovely pet house.

It resembles a human’s house with a door for the main entry, two distinct entrances, a balcony, three small windows, and a roof that is shaded.

Since being shared, the video has amassed over 6.7 lakh views and more than 33,000 likes in just few hours. More than 4,000 users have re-tweeted the post.

“Curtains,” one user wrote, while another said, “It’s Spain. I’ve seen it myself when I was there recently, but I’m not too sure which city it was. Villajoyosa or Valencia I guess.”

“A little street villa of his own,” commented a third user.

Kittens are adorable to watch. Their videos are frequently shared on social media. Recently a video went viral on social media that showed an unusual friendship between a kitten and a dog. They were seen sleeping together on a bed, with the kitten doing everything to make its friend happy.

That video was also shared by Buitengebieden on Twitter and credited to a user named Bill Withers. It received around 2.1 million views and over 77,000 likes after getting shared.