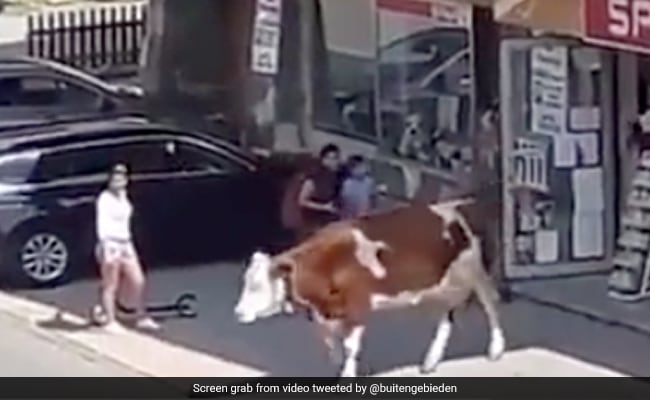 Picture shows a cow coming out from the supermarket.

You must have seen stray animals wandering on the roads that either don’t have owners or are abandoned after they get old. These animals are either fed by the public or they roam around the streets in search of food. But there are some that follow the ways of the humans.

Like a cow in Austria. A video going viral on social media shows the cow casually coming out of a supermarket. It has been shared by Buitengebieden on Twitter.

The video, in the beginning, shows very few people on a quiet street around a supermarket in Austria. Suddenly, a cow emerges from the store and walks on the streets leaving people surprised. A man standing outside the supermarket is seen capturing this incident on his mobile phone.

The 15-second clip has amassed over 2.5 million views and more than 60,000 likes since being shared. More than 6,000 users have re-tweeted the post so far. Users have made comments wondering why the cow visited the store.

“I guess Spar is the only place to go for fresh milk,” wrote one user.

Another said, “I love Austria too. I miss it. I used to go several times a year but sadly it’s been almost 10 years the last time I was there.”

“I wrote a poem called The Black and The Tears after attending a funeral. That got it out of my system. You could try writing the black out of your black Alice. Meanwhile, here’s something random to watch,” wrote a third user while sharing the video.