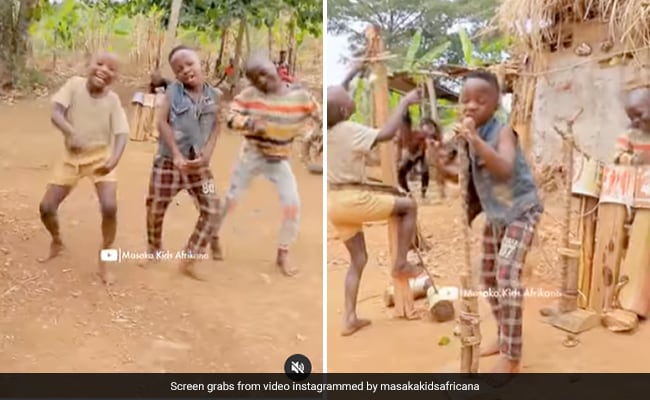 Masaka Kids Africana have around 4.4 million followers on Instagram.

A group of African children is taking the internet by storm with their back-to-back viral dance and lip-sync videos. The clips were posted on Instagram by an Uganda-based NGO called Masaka Kids Africana which supports the life of children who have lost one or both parents to famine, war and other diseases.

On Sunday, the organisation posted yet another video of three kids dancing and lip-syncing to the song ‘Electricity‘ by Pheelz and Davido. In the clip, while one of the boys was seen lip-syncing to the song and holding a stick in front of like a mic, another was seen playing the drums made of paint buckets. A third was seen simply showing off his killer dance moves.

Watch the adorable video below:

“Good vibes all the way,” read the caption of the post. Since being shared, the video has accumulated more than five million views and over 328,000 likes.

Internet users flooded the comment section with heart, fire and lovestruck emojis. While one user called the three boys “baby kings,” another called them, “adorable”.

“These kids are amazing! I love watching their videos!” said one user. “This is the best account on IG. These kids are so talented and always put a smile on my face,” added another.

A third wrote, “Love these Kids. When I see them dancing, my heart blooms,” while a fourth commented, “These kids are real performers – so natural”.

On Instagram, the Masaka Kids Africana have around 4.4 million followers. The organisation regularly posts videos of kids performing to popular songs. Earlier this month, on the occasion of India’s 75th Independence Day, the NGO even posted a video of the children dancing to the famous Bollywood song, Gallan Goodiyan, from the movie Dil Dhadakne Do.

The video garnered more than six million views and over 410,000 likes.