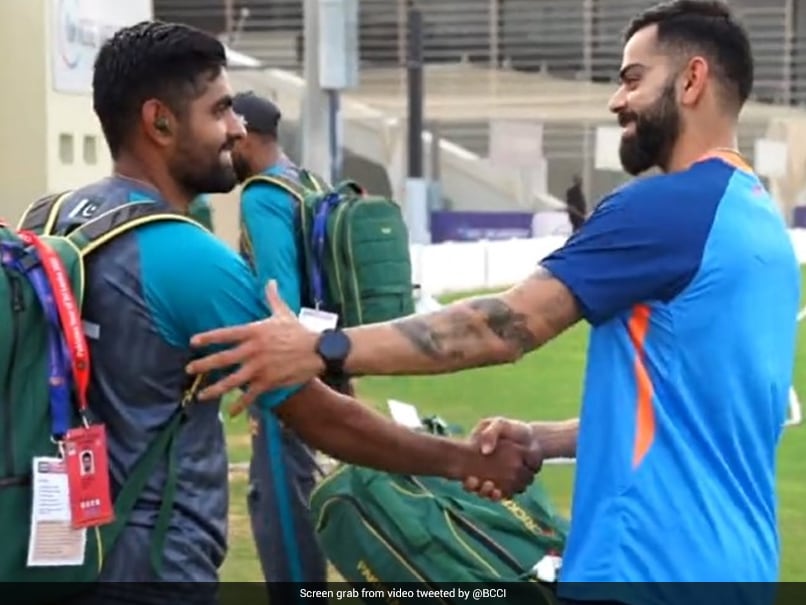 The Indian cricket team has landed in Dubai for the Asia Cup 2022 which starts on August 27. The Rohit Sharma-led side will begin its campaign against arch-rivals Pakistan cricket team on August 28. All eyes are on that clash. Ahead of the big match, players from both the teams met each other in Dubai. Players from the Afghanistan side were also present. In a video uploaded by the BCCI on its social media handles, the likes of Hardik Pandya, Yuzvendra Chahal could be seen chatting with the likes of Rashid Khan and Mohammad Nabi. However, the focus was on Virat Kohli as he met with Pakistan captain Babar Azam.

Going by recent form, Babar is one of the top batters in the world, whereas Kohli has struggled of late. Comparisons between the two had started long back and now it has gathered steam.

Hugs, smiles and warm-ups as we begin prep for #AsiaCup2022 #AsiaCup | #TeamIndia pic.twitter.com/bVo2TWa1sz

In a recent conversation with broadcaster Star Sports, ahead of the team’s bumper clash against Pakistan in the Asia Cup, Kohli compared his current form with his struggles on the tour of England in 2014.

He said that his failures in England had a pattern, while the current lack of runs isn’t a matter of worry because he feels he is batting well.

“What happened in England was a pattern, so something that I could work on and something that I had to kind of overcome. Right now, as you rightly mentioned, there is nothing that you can point out saying that the problem is happening here. So, that for me, is actually an easier thing to process because I know that I’m batting well and at times, when I start feeling that rhythm back, then I know that I’m batting well. So, that for me is not an issue, which wasn’t the case in England; I didn’t feel like I was batting well at all. So, I had to work hard on one thing that could be exposed again and again which I overcame; right now this is not the case,” Kohli said while speaking exclusively on Star Sports show ‘Game Plan’.

India are the most successful team in the history of Asia Cup and are also two-time defending champions. Pakistan last won the tournament in 2012.