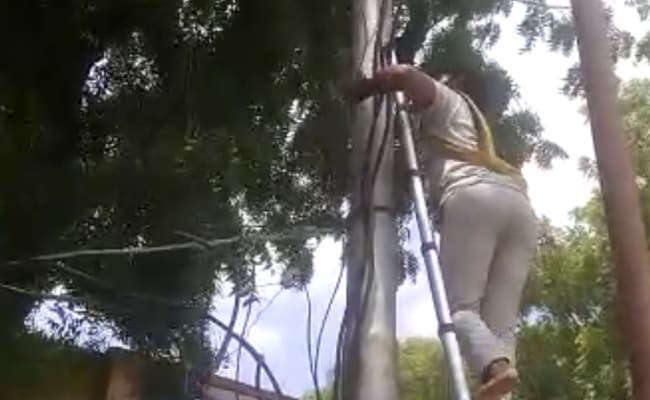 The power supply to a police station in Uttar Pradesh’s Shamli, was cut off by the electricity department, citing overdue bills, after the district traffic police fined a contractual employee from the state power department Rs 6,000 for not wearing a helmet while riding a motorcycle.

It is still not clear why a hefty fine of Rs 6,000 was issued on the lineman when the official penalty for not wearing a helmet while riding a two-wheeler in Uttar Pradesh is Rs 2,000.

In a video that went viral on social media, a lineman can be seen climbing an electricity pole to disconnect the power supply to the Thana Bhavan Police Station.

The electricity department claimed that the police station had outstanding power bills running into thousands of rupees. No comments were available from the police.

Giving details about the incident, Mehtab said the traffic police stopped him for not wearing a helmet while he was returning from work on his bike.

He pleaded with the police, saying that the offence would not be repeated.

However, the policeman on duty apparently was in mood to listen to him and said that the power department was in any case looting people with inflated bills.

He then issued a Challan for Rs 6,000 to Mehtab, whose monthly salary is only Rs 5,000. Mehtab also claimed that while he was fined, many other offenders were let off in his presence.