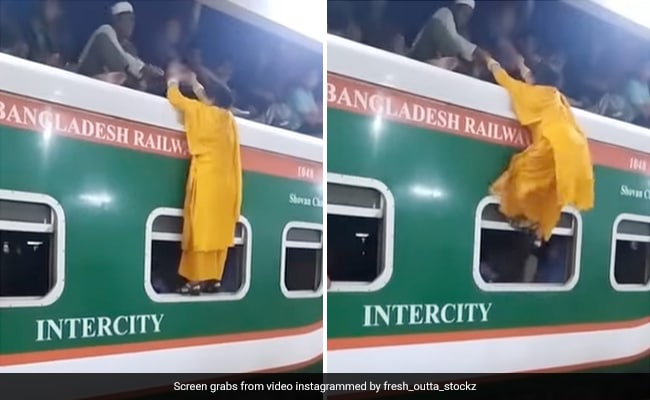 The video accumulated more than 12 million views and over 360,000 likes.

A video showing a woman trying to climb on the roof of a crowded train has surfaced online. The short clip was posted on Instagram by ‘fresh_outta-stockz’. The caption of the post read, “Just another day at a railway station in Bangladesh”.

In the clip, the unidentified woman was seen trying to get atop an Intercity Express in Bangladesh, probably after she was unable to get a seat on public transport. Shockingly, the video also showed several people already sitting on the roof of the train, right before it was scheduled to leave the platform.

The video opened to show the woman trying to make several efforts to reach the top. She stood at the window edge of the Intercity Express, while others who were already sitting on the top tried to pull her up.

But despite several attempts and help from people, the woman failed to climb up. At the end of the clip, a railway police jawan was then seen arriving at the location with a stick in order to stop her from climbing atop the train.

The short video was posted on August 10. In the comment section, while some users blamed overpopulation for such state of affairs, others simply found the clip amusing.

One user wrote, “Overpopulation effects.” Another asked, “How can so many people sit on the roof without holding?”

Viral Video | Pilot Makes Announcement In Punjabi-English Mix, Internet Says “Would Love To Be On His Flight”

A third said, “Population is an increasing problem,” while a fourth commented, “Why is this even allowed? Why it isn’t a criminal offense?”

The video accumulated more than 12 million views and over 360,000 likes.