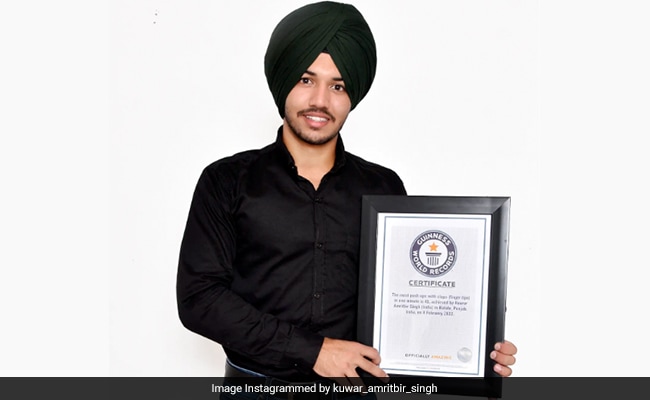 The 19-year-old did 45 pushups in sixty seconds to achieve the record.

A fitness enthusiast from Punjab, who apparently never went to the gym, has won Guinness World Record (GWR) for doing most push-ups with claps (fingertips) in one minute.

19-year-old Kuwar Amritbir Singh from Umarwala village in Batala in the Gurdaspur district of Punjab did 45 pushups in sixty seconds and accomplished his record on February 8 2022. He executed finger push-ups along with claps after each dip. As per GWR, Kuwar attempted this record to inspire the youth in India.

“Guinness World Record Holder! Yessss I Did it. ‘Most Push ups with claps ( finger tips ) in one minute'” he said on Instagram.

In the social media post, Kuwar explained his preparation for the challenge. He revealed that he just practised for 21 days to break the record.

In a separate post, Kuwar also said that he never went to the gym, didn’t take supplements and consumed only what was made by his mother. To level up his fitness, the teenager even managed to build gym equipment on his own.

“It wasn’t tough to break this record ‘ yess!! Because it’s a common thing for everyone that we have to work hard if we want to achieve our goals,” he said.

Moreover, the youngster from Punjab stated that his vision is to create a healthy nation. He contributes to this by sharing fitness videos on his social media handles. His achievements over the past years have also become an inspiration for the youth.

According to the caption of the post, at the age of 18, Kuwar became the youngest athlete to perform a maximum of 118 Knuckle pushups in sixty seconds. He also won the India Book of Records for the youngest to perform maximum – 35 – Superman pushups in 20 seconds. Lastly, he was nominated for the Karmaveer Chakra Award in 2021, which is presented to recognize, encourage, celebrate and inspire citizen’s action for social justice.