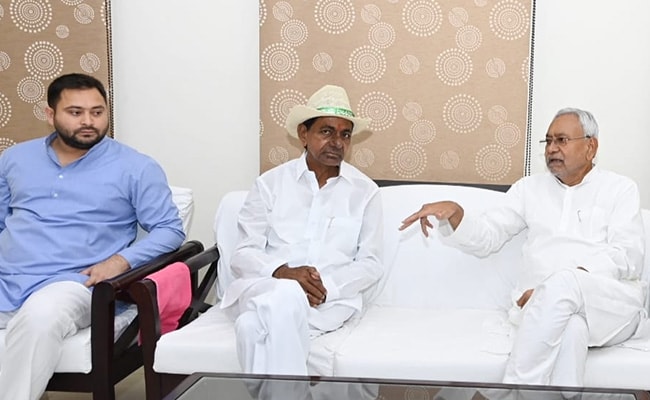 The three leaders are expected to discuss national politics.

In his latest outreach move aimed at stitching together an alliance of like-minded parties against the Bharatiya Janata Party, Telangana Chief Minister K Chandrashekar Rao today met Bihar Chief Minister Nitish Kumar and his deputy Tejashwi Yadav in Patna. The leaders are scheduled to appear at a few events before heading for lunch. Mr Rao, sporting a fedora hat, posed for pictures whil being welcomed with flower bouquets by his Bihar counterpart and Rashtriya Janata Dal Chief Mr Yadav. The three leaders are expected to discuss national politics.

BJP leader Sushil Kumar Modi took a dig at the two Chief Ministers, saying their meeting is a “get-together of two daydreamers”.

Taking a swipe at the meeting, Mr Modi, who was a Deputy Chief Minister for more than a decade with Mr Kumar as the Chief Minister in the JD(U)-BJP government in Bihar, said it is a meeting of two leaders who are losing their base in their respective states and “desiring to become Prime Minister of the country”.

“It is a meeting of two daydreamers who have no standing in front of Prime Minister Narendra Modi,” the BJP leader told reporters. He dubbed the meeting as the “latest comedy show of opposition unity.”

The Telangana Chief Minister’s visit assumes special significance as it comes soon after former BJP ally Nitish Kumar ditched the ruling party and joined forces with the Rashtriya Janata Dal to form the government in Bihar. KCR had even earlier planned to visit both Mr Kumar and RJD leader Tejashwi Yadav in Bihar on his national tour to consolidate a viable non-BJP, non-Congress front. His scheduled meeting with Mr Kumar, then ally of the BJP, had caused confusion as the Telangana Chief Minister has the BJP in his crosshairs ahead of the next Lok Sabha elections. He has bitterly criticised PM Modi and the BJP in his public speeches.

At a public meeting two days back, KCR tore into the NDA government at the Centre, saying people should take a pledge to make a “BJP-mukt Bharat” in 2024. He called Prime Minister Narendra Modi “Golmal PM”, adding whatever he and the Centre say are “blatant lies”.

“We all should take a pledge and be prepared to create BJP-mukt Bharat in 2024. We should march forward with that slogan. Then only we can save this country, otherwise there is no scope to save this nation,” he had said.

During his Bihar visit, Mr Rao, popularly known as KCR, will also distribute money to the families of soldiers who died in the Galwan valley clashes at the Indian border with China in Ladakh. As promised earlier, he will hand over Rs 10 lakhs each to the families of the soldiers.

He will also provide financial assistance to the families of 12 workers from Bihar who died in a recent accident in Telangana. He will hand over cheques of Rs 5 lakh to each family of the migrant workers who died.

KCR will distribute the cheques along with Nitish Kumar.

Once an enthusiastic supporter of Prime Minister Narendra Modi-led government — Telangana Rashtra Samithi often backed PM Modi on key issues in Parliament — the Telangana Chief Minister is now one of the leading opposition voices against the Centre and the BJP on several issues.

KCR has stepped up efforts to unite various parties against the BJP government’s ‘anti-people’ policies for some time now and has called on various opposition leaders, including Sharad Pawar, Uddhav Thackeray, Arvind Kejriwal, Mamata Banerjee, and Akhilesh Yadav. Describing Prime Minister Narendra Modi as the “weakest and inefficient” Prime Minister ever in the country, he had last month said there is a need for “double-engine non-BJP government” at the Centre.