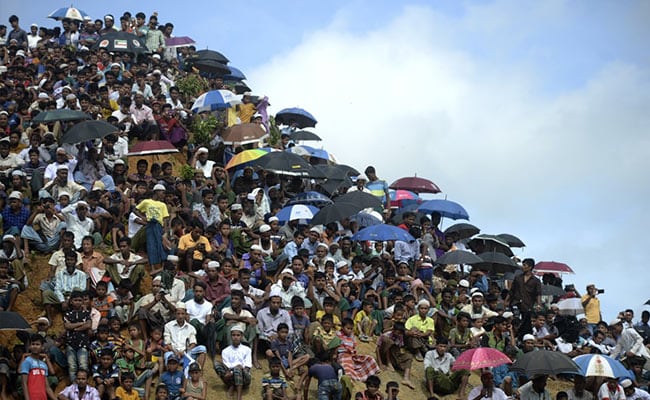 “All we want is a safe and dignified return to our homeland,” said leader Sayed Ullah.

Thousands of Rohingya refugees held “Genocide Remembrance Day” rallies on Thursday across a huge network of camps in Bangladesh, marking five years since fleeing a military offensive in Myanmar.

In August 2017 around 750,000 of the mostly Muslim minority streamed over the border with mainly Buddhist Myanmar to escape the onslaught, which is now the subject of a landmark genocide case at the UN’s top court.

Today there are nearly a million Rohingya, half of them under 18, in rickety huts in camps where the mud lanes regularly become rivers of sewage during monsoon rains.

On Thursday thousands staged rallies in many of the camps, holding banners, shouting slogans and demanding a safe return to their home state of Rakhine in western Myanmar.

“Today is the day thousands of Rohingya were killed,” young leader Maung Sawyedollah said with tears in his eyes as he led a rally in Kutupalong — the world’s largest refugee settlement.

“Only Rohingya can understand the pain of the 25th of August. Five years ago this day nearly one million Rohingya were displaced. On this day in 2017 more than 300 of our villages were burnt down to ashes,” he said.

“All we want is a safe and dignified return to our homeland,” said Sayed Ullah, another community leader.

“Unfortunately, our cries have fallen on deaf ears. The international community is not doing anything. Here in the camps we are languishing in tarp and bamboo shelters and barely surviving on handouts,” he said.

Many shouted slogans also demanding the repeal of a 1982 law that stripped them of their citizenship in Myanmar, where they are widely seen as foreigners. Several attempts at repatriation have failed, with Rohingya refusing to return without security and rights guarantees.

Rohingya community leaders complain that the security situation in the Bangladeshi camps — surrounded by barbed wire — is also deteriorating, with at least 100 people killed in violence since 2017.

Many of the killings are blamed on a Rohingya insurgent group, as well as gangs involved in drug smuggling and human trafficking that find easy recruits among the many bored young men in the camps.

“It’s a prison for the Rohingyas. The life of the Rohingyas has worsened in these five years,” said one young activist, declining to give his name for fear of retaliation from Bangladeshi police.

“Rohingya shops were demolished. We need to take permission to go out of the camps to meet our relatives. We feel unsafe because of violence and the rising number of targeted killings,” he said.

A survey of the refugees published by Doctors Without Borders (MSF) on Thursday showed that the camps were becoming increasingly unhygienic.

It said that 76 percent of respondents said toilets were overflowing, up from 38 percent in 2018. Acute watery diarrhoea cases have increased by 50 percent compared to 2019 and cases of skin infections like scabies have also soared.

Fires are common. Last year, a massive blaze left around 15 people dead, 560 injured and up to 10,000 families — more than 45,000 people — displaced. The United Nations High Commissioner for Refugees or UNHCR has called for more funding from the international community. To ease overcrowding, Bangladesh authorities have relocated about 30,000 Rohingya to an island but there are worries it is prone to flooding.

“Voluntary and sustainable repatriation is the only solution to the crisis,” said Bangladesh Foreign Minister A.K. Abdul Momen.