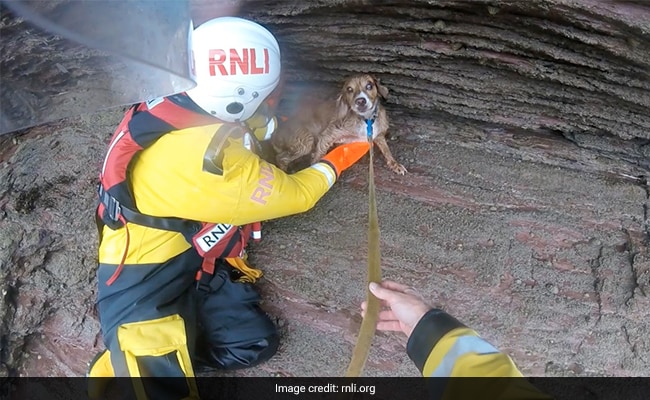 The crew members found the dog whimpering at the base of the cliff.

A dog that fell 100 feet down a cliff was rescued by emergency responders in England. The photos of the rescue operation, that took place last week, have been posted online by the Royal National Lifeboat Institution (RNLI). The dog had become stuck at the base of a cliff above St Mary’s Bay in Torbay after the fall, but is likely to recover from its injuries, according to the institute.

The dog named Yogi (of spaniel breed) slipped from the cliff last week while taking a walk with its owner Emily Linehan. After the incident, Ms Linehan immediately dialled 999 and requested for the Coastguard to assist help, the institute said in a release.

The RNLI deployed a lifeboat and its volunteer crew members found the dog whimpering at the base of the cliff – wet, cold, and with injuries to his legs, eye, and spine.

Jack Hawkett, a crew member, carefully led the terrified dog away from the rocks, RNLI said, adding that the canine was then lifted onto the lifeboat, which took it back to shore to be reunited with the owner.

“I’m so grateful to the crew. There are no words for how I feel right now,” Ms Linehan was quoted as saying in the RNLI release. “I’m so impressed with how kind everyone was – all the crew were amazing. Yogi wouldn’t be here if it wasn’t for the RNLI,” she added.

According to the institution, Yogi was injured in the fall and had a shattered spine, fractured ribs, nerve damage, and an injured eye. The dog was taken to a veterinary surgeon for emergency surgery, but was later released and is recovering at home.

“It looks like he’s going to make a full recovery and will be able to run like he could before. He’s a very lucky boy,” Ms Linehan further said.

James Hoare, the captain of the lifeboat said, “We’re just so glad we found him quickly as he was cold and shaking as well as injured. We wish him all the very best and the fastest possible recovery.”