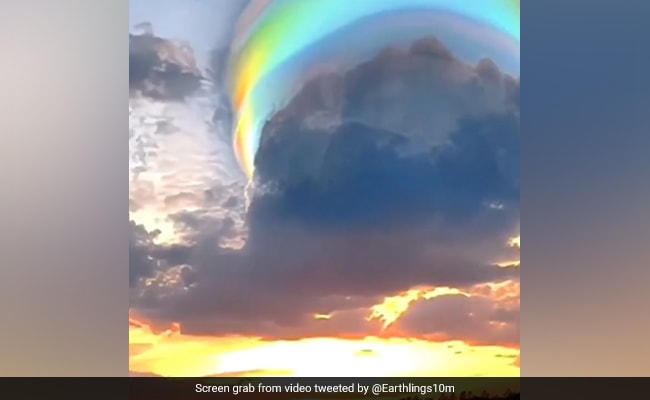 Nature is magical, and it occasionally allows us to witness its magic. One such video of a rare rainbow pileus (or ‘scarf’) cloud captured in China’s Haikou City is going viral on the social media.

It has been shared by several users on Twitter. The video shows a mesmerising view of rainbow coloured scarf cloud over the city.

The video was shot on August 21, according to Mashable, and shows various cloud colours that together form a rainbow-coloured canopy, giving the sky an unusually lovely appearance.

According to World Meteorological Department (WMO), pileus cloud is an accessory cloud of small horizontal extent, in the form of a cap or hood above the top or attached to the upper part of a cumuliform cloud that often penetrates it.

Several pileus may fairly often be observed in superposition, it added.

Though mesmerising, these clouds do not have a very long life, with the main cloud underneath eventually rising up via the process of convection to absorb the rainbow cloud above.

Recently, authorities in China were trying to generate rain during a severe drought that was caused by a sweltering heatwave. The country was reportedly intending to utilise cloud-seeding technology to generate rain in an effort to alleviate the drought conditions afflicting several regions, including the Yangtze River basin.

The process of cloud-seeding involves sending aircrafts into the clouds and releasing silver iodide, which induces rain to fall on the ground. The scientists also believe that a geoengineering like this might be used in the future to prevent the impacts of climate change on the planet.