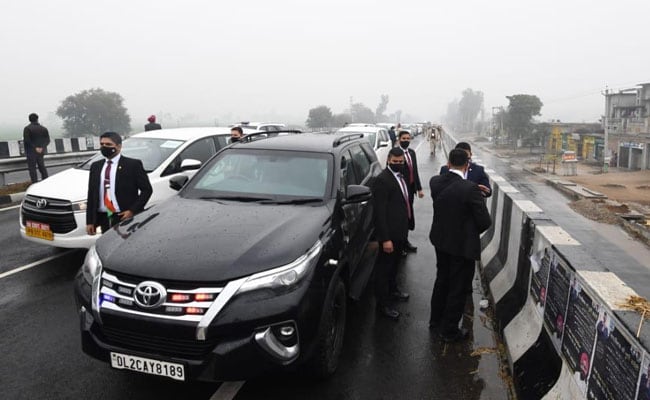 PM Modi’s convoy was blocked by protesting farmers in January.

In the presence of Prime Minister Narendra Modi, Punjab Chief Minister Bhagwant Mann on Wednesday referred to what he called the “unfortunate incident” in Ferozepur, when the PM’s convoy was blocked by protesters on a road.

“We are facing a threat from Pakistan near our border but we have been thwarting their attempts. We have eliminated gangsters and militants, and due to failure of previous governments, even you had to face that unfortunate incident in Ferozepur earlier this year. But today, it is the same Punjab which has welcomed you,” said Bhagwant Mann.

“Punjabis are known for hospitality,” added the Chief Minister.

The Chief Minister shared a stage with PM Modi in Mohali for the launch of the Homi Bhabha Cancer Research Centre.

Mr Mann also urged the Prime Minister to “give something” to his state. “You have arrived in Punjab after a long time and you have never hesitated from giving grants to Punjab. I hope that even today you will give something,” he said.

In January, while campaigning for the Punjab election, PM Modi was driving to a rally in Ferozepur when his convoy was caught in the middle of a flyover with protesting farmers blocking the route. The PM was forced to turn back without addressing the rally.

Ahead of polls, the incident triggered a huge political fight between the ruling BJP at the Centre and the then Congress government in Punjab.

Arvind Kejriwal’s Aam Aadmi Party (AAP) won the Punjab election, emphatically beating all rivals including the Congress and the BJP, and establishing itself in its first major state after Delhi.

Bhagwant Mann’s comments on the Ferozepur incident stand out at a time his party (AAP) is locked in a massive row with the Centre over its leaders being investigated by probe agencies and over allegations that the BJP is trying to lure AAP MLAs and pull down the Kejriwal government in Delhi.