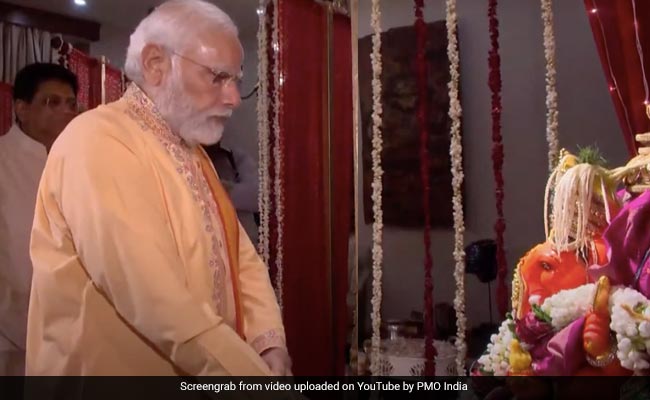 Prime Minister Narendra Modi on Wednesday visited the residence of Union minister Piyush Goyal in the national capital and performed ‘aarti’ on the occasion of Ganesh Chaturthi.

Earlier in the day, the Prime Minister extended greetings on the occasion of Ganesh Chaturthi.

The Prime Minister shared a shloka in Sanskrit while extending wishes and wrote on Twitter, “Best wishes on Ganesh Chaturthi. May the blessings of Lord Shri Ganesh always remain upon us.”

President Droupadi Murmu also extended greetings on the occasion of Ganesh Chaturthi and prayed for peace and prosperity in the lives of the citizens.

“Hearty greetings to all the countrymen on Ganesh Chaturthi. Mangalmurti Lord Ganesha is a symbol of knowledge, accomplishment and good fortune. I wish that with the blessings of Shri Ganesh, there should be a spread of happiness, peace and prosperity in everyone’s life,” the President tweeted.

“Happy Ganesh Chaturthi to all the countrymen. Ganpati Bappa Morya!” he tweeted.

Ganesh Chaturthi festival is celebrated every year with great fervour in India with thousands of devotees thronging temples and ‘Ganeshotsav pandals’ to offer their prayers.

The festivities began on August 31 and will conclude on September 9. The festivities will end with the final immersion of the Ganesha idols, called the Visarjan. The festival is celebrated with much grandeur in Maharashtra, Tamil Nadu, Karnataka, and Gujarat among other states.

The festival is celebrated with much pomp and zeal in several states across the country and 2022 marks the return of its celebration after 2 years of COVID-induced restrictions.

Also known as Ganeshotsav, this auspicious ten-day starts with Chaturthi Tithi and ends on Anantha Chaturdashi. Devotees of Lord Ganesh, the god of wisdom and good fortune, mark his birth during the Shukla Paksha of Bhadrapada month.

People bring Lord Ganesh idols to their homes, observe fasts, prepare mouth-watering delicacies, pray to the Lord and observe rituals during this festival. With 2022 bringing back the Ganesh Chaturthi festivities and only 2 days left for the occasion, preparations are in full swing across the nation.

Earlier today, morning ‘Aarti’ was performed at Shri Siddhivinayak Temple in Mumbai on the occasion of Ganesh Chaturthi.

Eco-friendly idols of Lord Ganesh have been prepared for the festival of Ganesh Chaturthi in Chhattisgarh’s Raipur.

Speaking to ANI, Ravi Yadav, an idol artisan said, “This time demand for idols is good. We have made five different types of idols which include pasta, matchsticks and incense sticks idols.