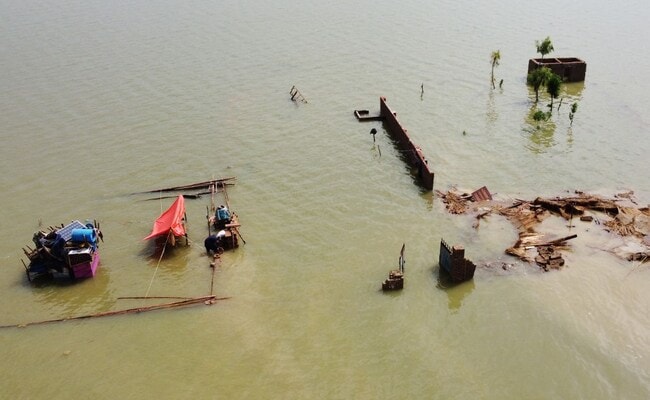 As Pakistan is facing deadly floods, the country’s Prime Minister Shehbaz Sharif on Tuesday said the international community should not leave developing countries like Pakistan at the mercy of climate change.

“If it is us today, it can be somebody else tomorrow. Threat of climate change is real, potent and staring us in the face,” Shehbaz Sharif tweeted after he met the international media to brief them about the flood situation in Pakistan.

My point was that international community, particularly the developed world, should not leave developing countries like Pakistan at the mercy of climate change. If it is us today, it can be somebody else tomorrow. Threat of climate change is real, potent & staring us in the face.

“Met members of international media today to brief them about flood ravages in Pakistan. The devastation is evidence of the seriousness of the threat posed by climate change. Despite having less than 1 per cent share in carbon emission, we are ranked 8th in terms of exposure to climate hazards,” he said.

Pakistan government has declared the floods a national emergency, with 66 districts declared to be a “calamity-hit.”

On Sunday, Climate Change Minister Senator Sherry Rehman warned that the number of flood-hit people might rise from 33 million as the country continue to face devastating floods.

“The humanitarian action is right now being led by the government and supported by United Nations and other humanitarian agencies. [A total of] 1,033 people have lost their lives and more than 1,500 have been injured. Kabul River is still at [a] very high flood level at Nowshera as the water has crossed 300,000 cusecs [and this] is why residents in some areas have not been allowed to come back to their homes,” she said in a statement cited by The Express Tribune.

The United States on Tuesday announced an additional $30 million in life-saving humanitarian assistance to support people and communities affected by severe flooding in Pakistan.

“The United States is deeply saddened by the devastating loss of life, livelihoods, and homes throughout Pakistan. In response to the Pakistani government’s request for assistance, the United States will prioritize urgently needed food support, safe water, sanitation and hygiene improvements, financial help, and shelter assistance,” the US Embassy in Pakistan said in a statement.

Over 1,100 people, including over 350 children, have lost their lives in the floods. More than 1,600 people have been injured, over 2,87,000 houses have been fully and 662,000 partially destroyed. Besides, over 7,35,000 livestock have perished and 2 million acres of crops have been adversely impacted, besides severe damage to communications infrastructure.