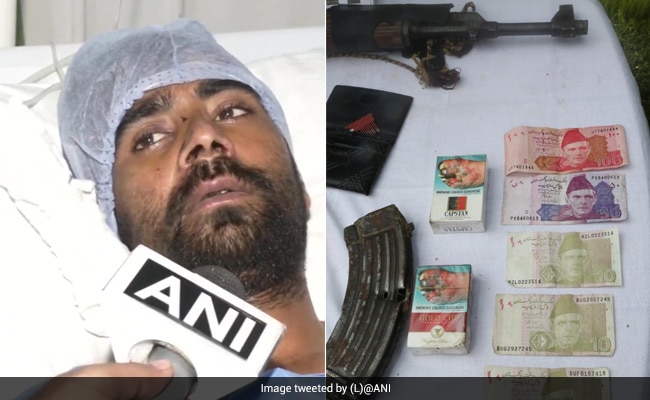 Arrested man had 30,000 Pakistani rupees on him; underwent surgery as he was shot during capture.

A Pakistani terrorist was captured and two others died in a landmine blast as two infiltration bids were foiled in Jammu and Kashmir’s Rajouri district over the last two days, the Indian Army said today. The captured man — who had earlier been arrested for crossing the Line of Control but sent back on humanitarian grounds — was tasked by the Pakistan Army, specifically a colonel, for an attack on an Indian post, it added.

The capture took place when, early morning on August 21, soldiers deployed in Jhangar sector of Nowshera region “spotted movement of two to three terrorists on own side of Line of Control”, said the army’s note. One of the infiltrators was close to the Indian post and trying to cut the fence. When he tried to flee, the soldiers opened fire, injuring and capturing him.

Two other infiltrators managed to run back into Pakistan-occupied territory, taking cover in the dense jungle. “The injured Pakistani terrorist was captured alive and provided with immediate medical aid and lifesaving surgery was carried out,” said the army.

He was identified as Tabarak Hussain, resident of village Sabzkot in Kotli district of Pakistan-occupied Kashmir. The army said he revealed during interrogation that he was “sent by Colonel Yunus Chaudhry of Pakistan intelligence agency”. The colonel gave him 30,000 Pakistani rupees, which were found on him, it said.

According to the army, Hussain said he was part of a squad that carried out recces of Indian forward, and got their final go-ahead on August 21.

“Incidentally, the individual was earlier captured by Indian Army from the same sector in 2016 along with his brother Haroon Ali, and was repatriated on humanitarian grounds in November 2017,” said the army note.

In the other foiled bid, on August 22 night “a group of two to three terrorists” tried to infiltrate in Lam sector in the same region. “Our alert troops were able to observe the terrorists,” said the army.

“As they moved ahead into our minefields, a series of mines got activated and two terrorists got eliminated on the spot,” it added. Their accomplices were possibly injured and might have gone back “taking advantage of the inclement weather and dense foliage”.

The bodies were spotted the next morning using a quadcopter, and were later recovered along with one AK-56 rifle, besides bullets and ration.

“As the area is heavily mined, the search operation is being carried out carefully and is still under progress. More recoveries in the area are expected,” the army further said.