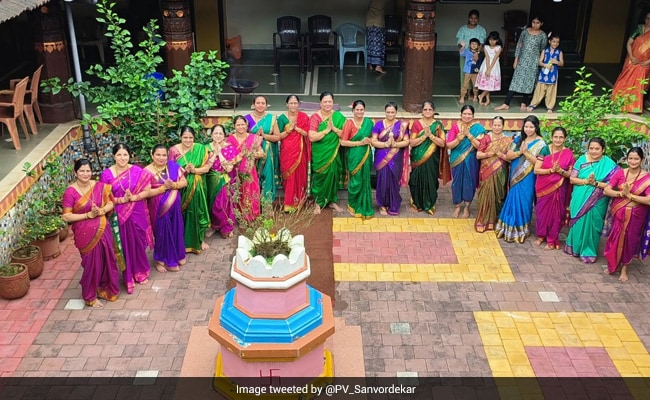 Such family reunions are a striking feature of Ganesh Chaturthi in Goa. ()

Bollywood film “Singham Returns” was shot at the 288-year-old Sanvordekar Wada, but it is ‘Family Returns’ that plays out here every Ganesh Chaturthi, as in many other households in Goa.

The mansion at Sanvordem in South Goa district, built in 1734, is abuzz with activity as more than 250 members of the Sanvordekar family have returned to celebrate the Ganesh festival.

Such family reunions are a striking feature of the festival in the coastal state.

“More than 250 members of the family have come together to celebrate Ganesh Chaturthi,” said Mandar Sanvordekar, a member.

The Wada or mansion, spread over 4,000 square meters with 80-odd rooms, four courtyards and four wells, had featured in the 2014 Ajay Devgn-starrer “Singham Returns”.

Members of the extended Sanvordekar clan are now scattered all over India. One of them, Wing Commander Vishwanath Sanvordekar, served in the Indian Air Force and was a decorated war hero. He died in a plane crash some three decades ago.

Sagar Sanvordekar, a retired professional who lives in Mumbai, said he and his family visit the mansion every Ganesh Chaturthi. Each family has its own room in the building.

Pranav Sanvordekar said the youngest generation is the 11th one since the mansion was built. “Those who attend the festival are from the seventh to the eleventh generation,” he said, claiming that this is one of the oldest joint families in the country.

Family members ensure that they contribute to the upkeep of the huge structure. “For the last around 300 years, the family has been contributing for a maintenance fund,” he said, adding that its heritage features have been preserved even though it is costly.

Kuwelkar family at Raia in South Goa district too has all its members reuniting on Ganesh Chaturthi.

Returning to the century-old house for the festival has been a tradition for them, said Dr Saidutt Kuwelkar.

“The tradition will continue forever. That’s the spirit of Ganesh Chaturthi,” he said.

Some families have also defied tradition to break new ground.

At the Samant family at Borim in South Goa, 19-year-old Kshitija Samant became the first daughter from the family to perform Ganesh puja.

“Family members decided that I should be performing puja this year. It is not written anywhere that a girl should not perform puja,” she said.