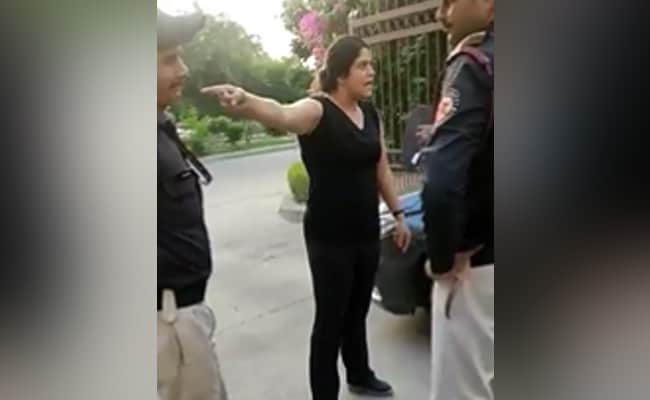 A woman, who was arrested after her video abusing and manhandling security guards of a Noida society went viral, was granted bail by a local court on Wednesday, her lawyer said.

Bhavya Roy (32) was arrested on Sunday while the incident had taken place on Saturday around 5.30 pm at the entry gate of Jaypee Wishtown society in Noida sector 128. Bhavya Roy was granted bail by the chief judicial magistrate Richa Upadhyay of the Surajpur court, her lawyer Inderveer Singh Bhati said.

“We argued that my client was arrested without any notice while it is necessary to issue a notice in cases where offences are of less than seven years prison term. The court was convinced and bail was granted,” Inderveer Singh Bhati told PTI.

He said he also cited Bhavya Roy’s clear criminal history or any such case which was also considered by the court.

Bhavya Roy, a lawyer by education, was in a sedan and got into an argument with security guards at the entry gate of Jaypee Wishtown society under Sector 126 police station limits allegedly due to a delay in the opening of the gate by one of them.

The security guard who lodged a complaint with the police claimed that Bhavya Roy not only hurled expletives, and humiliated him and his colleagues but also “made derogatory remarks and used abusive words” for a particular community.

The video of the incident also showed Bhavya Roy hurling expletives and grabbing guard Anup Kumar by his uniform. She also made indecent physical gestures and threatening remarks to him and other security guards on duty.

As the video went viral on Sunday, Bhavya Roy was booked under Indian Penal Code sections 153A (acts prejudicial to harmony), 323 (voluntarily causing hurt), 504 (intentional insult to provoke breach of public peace), 506 (criminal intimidation), among others, and arrested, the police said.