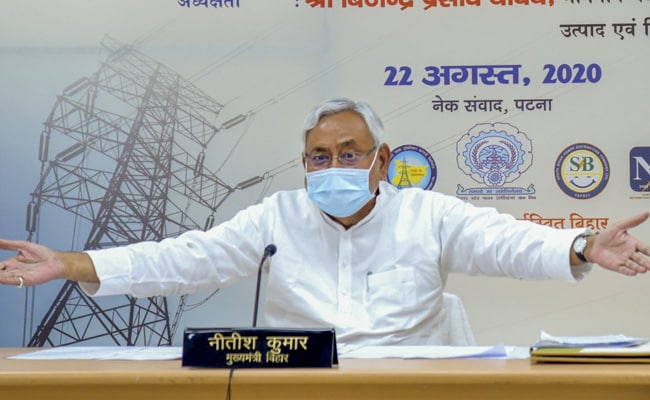 Five of JD(U)’s six MLAs in Manipur joined the ruling BJP on Friday.

A day after five of six MLAs of Bihar Chief Minister Nitish Kumar’s Janata Dal (United) in Manipur joined the ruling BJP, a war of words over each other’s political decimation has ensued between the former coalition partners. Bihar BJP MP and Nitish Kumar’s former long time deputy Sushil Kumar Modi last night taunted the JD(U) over its MLA switching sides, and said the party will collapse in Bihar as well very soon.

Mr Kumar’s close aide and JD(U) national President Rajiv Ranjan Singh then hit back, asking Mr Modi not to “daydream” and dared him that the BJP would be wiped out in 2024 Lok Sabha elections. He accused the BJP of not adhering to coalition “dharma” in Arunachal Pradesh, where all seven of its MLAs have now merged with the ruling party, and pointed out that PM Modi had to hold 42 rallies to win 53 seats in Manipur in 2015.

“Want to remind you that both in Arunachal and Manipur, JD(U) won seats by defeating @BJP4India. So don’t daydream of liberation from JD(U). Was what happened in Arunachal Pradesh because of your adherence to the alliance commitment?” he tweeted in Hindi.

In another tweet, he added, “…and once again in Manipur @BJP4India’s moral conduct is in front of everyone. You must remember that in 2015, the Prime Minister held 42 meetings, only then 53 seats could be won. In 2024, the country will be free from jumlebaajs….just wait.”

Weeks after the JD(U) broke off an alliance with the BJP for the second time in nine years in Bihar, five of its six MLAs in Manipur joined the ruling BJP on Friday. Since the number of MLAs who switched sides was greater than two thirds of the total, their crossing over was considered valid.

In 2020, six of seven JD(U) legislators had joined the BJP in Arunachal Pradesh, and last week its lone MLA in the northeastern state also crossed over to the BJP.

The JD(U) had won six of the 38 constituencies it had contested in the assembly elections held in March this year. The MLAs who joined the BJP are Khumukcham Joykisan Singh, Ngursanglur Sanate, Md Achab Uddin, former DGP LM Khaute, and Thangjam Arunkumar.