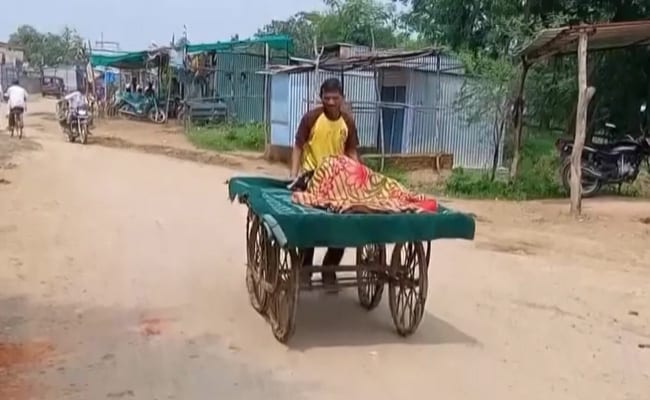 Madhya Pradesh: The woman’s husband alleged there was no doctor or nurse at the hospital.

Authorities have started an inquiry after a video showing the husband of a pregnant woman carrying her to hospital on a push-cart for want of ambulance emerged from Madhya Pradesh’s Damoh district.

When Kailash Ahirwal and his wife reached the local government-run Arogya Kendra after the one-km journey, there was no doctor or nurse there, he alleged.

Husband of a pregnant woman carried her to hospital on a push-cart for want of ambulance in Damoh, Kailash Ahirwal reached the local government-run Arogya Kendra after 2 kms journey, there was no doctor or nurse there, he alleged @ndtv@ndtvindiapic.twitter.com/cXj94L5oX5

The incident took place at Raneh village, 60 km from the Damoh district headquarters on Tuesday, and a video of Ahirwal taking his wife on a push-cart became viral on social media.

R P Kori, block medical officer at Hatta, said he had come across the video and an inquiry will be conducted. Notices will be issued to the concerned employees as to why an ambulance was not provided to ferry the pregnant woman to hospital, he said.

Mr Ahirwal said that after his wife began to have labour pains on Tuesday, he called the 108 government ambulance service but no ambulance came for two hours.

He then put her on a push-cart and took her to the local Arogya Kendra where no nurse or doctor was available, he claimed.