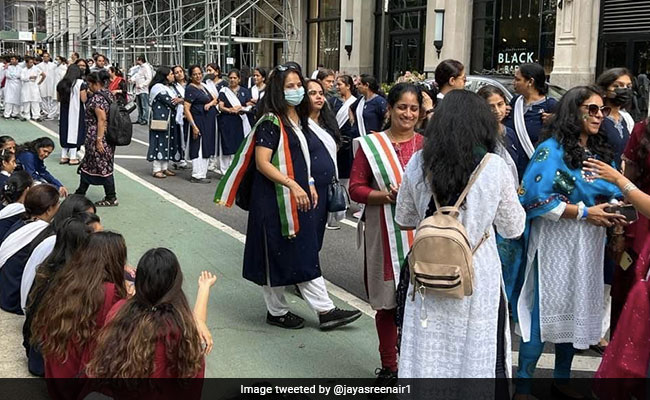 Guinness World Record: Over 1,500 volunteers registered for the event.

As part of the ‘Azadi Ka Amrit Mahotsav’ celebrations in New York, the Federation of Indian Associations (FIA) set two Guinness World Records for the most number of different flags flown simultaneously and the largest ensemble of the musical instrument Damru.

The Indian expatriates attempted the records to commemorate the completion of 75 years of Indian Independence, which was earmarked as ‘Azadi Ka Amrit Mahotsav’ – the celebration of eternal freedom by Prime Minister Narender Modi.

FIA president Kenny Desai said that he salutes the vision and efforts of PM Modi. He also said FIA tried to do their bit by attempting the records and making their motherland shine in their homeland.

FIA chairman Ankur Vaidya said that these records are dedicated to the global community and thanked the community for their support without which the feat would not have been possible.

FIA secretary and event chair for the attempts Pravin Bansal said that the endeavour required massive efforts and the whole team of FIA volunteers had been working day and night for the past few months, especially since the logistics were a big challenge in itself.

More than 1,500 volunteers who registered for the event turned up early in the morning and the prevalent atmosphere was of patriotic fervour.

‘Azadi Ka Amrut Mahotsav’ was a series of events organised by the central government to commemorate the 75th Anniversary of Independence.