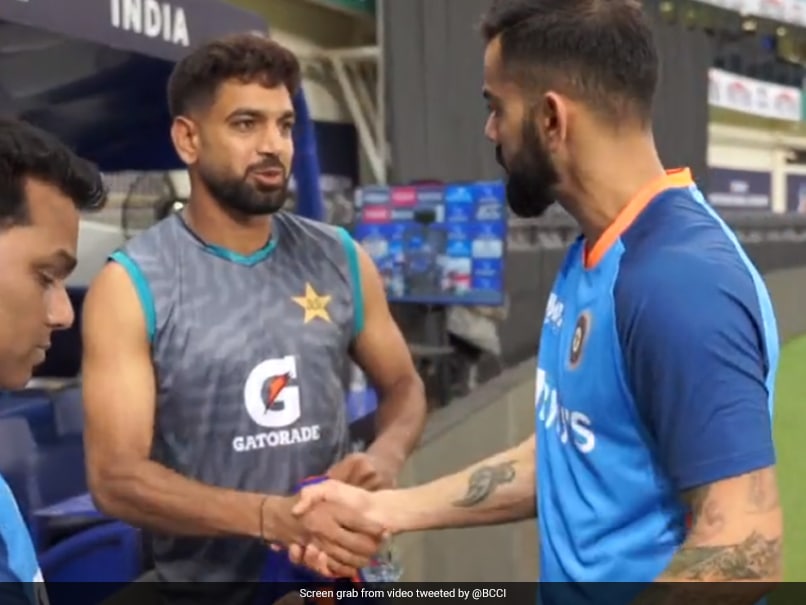 India and Pakistan will square off once again in the Asia Cup on Sunday and this time around it would be in the Super-4 stage. When these two teams faced off in the group stages, India emerged triumphant by five wickets. In that match, Virat Kohli scored 35 runs off 34 balls and after the game, he also gave a signed jersey to Pakistan pacer Haris Rauf. Ahead of the Super-4 match against India, Haris talked about how big a player Kohli really is, and how good it was to receive the jersey from the former Indian skipper.

“It is a game, and we take it as a game. Virat Kohli is a big player, the way he has performed for his country in international cricket, he is a legend of the game. When you talk to him, you always learn a lot. He gave me a signed jersey, thanks to him. I had earlier spoken to him about getting a shirt, so he gave me after that match, it was really nice,” said Haris during a press conference in Dubai on Saturday.

Suryakumar Yadav has been the in-form batter for India and in the game against Hong Kong, the right-handed batter scored 68 runs off just 26 balls.

Talking about Suryakumar, Haris said: “The way he has been performing for India, he has been consistent. When you go up against a big player, you always try to focus on your strength. We will try to execute our plans against all their batters and we will look to exploit their weak spots. We will look to bowl dot balls to create pressure on them.”

“Suryakumar Yadav and Hardik Pandya are their main players, they have been performing consistently. We will try to take their wickets early on so that India come under pressure. If we dismiss them early on, it would be good for us,” he added.

Pakistan captain Babar Azam has not been able to get going in the Asia Cup so far, but Haris stressed that it is a team game rather than a side being dependent on certain individuals.

Talking about the match against India in the group stage, the pacer said: “No doubt, the way we played the cricket against India, it was a good sign and now we are looking to carry on with the performance we showed against Hong Kong. Our players were getting cramps in the first game, our medical team has been helping us. We will look to give our best.”

“It is a high-pressure game. The standard in international cricket is always high. Ravindra Jadeja is injured for India but they have brought in the replacement of Axar Patel. They have brought in a left-arm spinner for a left-arm spinner. We will look to give our best and carry on with the momentum we managed to create against Hong Kong,” he added.