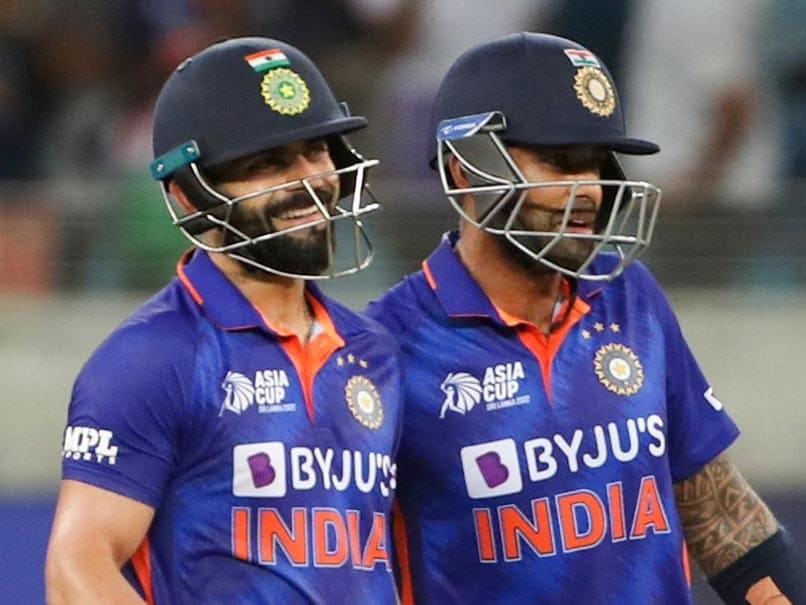 Rohit Sharma-led India Team India progressed to the Super 4s stage of the ongoing Asia Cup on Wednesday after the side defeated Hong Kong by 40 runs. Suryakumar Yadav and Virat Kohli were the stars of the match as the duo put on an unbeaten stand of 98 runs for the third wicket. India were struggling at 94/2 at one stage in the 13th over, but Suryakumar completely changed the complexion of the game as he smashed an unbeaten 68 off just 26 balls, hitting 6 fours and 6 sixes. On the other hand, Kohli scored 59 off 44 as India posted 192/2 in 20 overs.

“It is my honour to interview SKY today who had played an outstanding knock today. A knock that I thoroughly enjoyed from the other end. He came in and completely changed the momentum of the game on a pitch that wasn’t as easy as he made it look, to be honest,” Kohli said in a video posted on the official website of BCCI.

“Well done, it was a brilliant knock, I have seen so many from a distance when we play against each other in the IPL, or that being done to other teams when we play for India,” he continued.

“But this was my first experience of watching it so closely. I was completely blown away,” the former skipper exclaimed.

“I just want to understand when you walked out there, what was your mindset? You spoke to me that you already had planned something looking how the game was going so please explain that,” he asked Suryakumar.

Answering Kohli’s question, Suryakumar said: “Firstly, I like batting with him (Kohli). When we were sitting inside, Rishabh and I were speaking about how we take the game ahead as the wicket was a little slow. When I went to bat, I just tried to be myself and do what I love doing. In the first ten balls, I wanted to hit 3-4 boundaries that time and when I got that, I just kept batting. At that moment, I knew I needed you there and that’s when I told you that keep batting at the other end, it will be easy for you to cover up at the end.”

Four of Suryakumar’s six sixes came in the final over and the explosive batter said that he was indeed aiming to emulate the legendary Yuvraj Singh by dispatching every ball of the over past the boundary ropes.

“I was trying my best to hit 6 sixes in the last over but let’s not get past Yuvi paa,” he joked.

Kohli and Suryakumar had put on 98 runs for the third wicket, and this stand came off just 42 balls.

“The partnership was amazing, it was brilliant for us as a team. It was something I thoroughly enjoyed,” Kohli told Suryakumar.

“I look forward to seeing you play these types of knocks regularly because I honestly believe with the way you played today and stay in that zone, you can literally change the complexion of the whole game against any team in the world,” he added.

Kohli, who struggled to score freely initially, managed to get to his half-century and also accelerated at the death.

He came into the tournament after a month-long break amid a lean patch he would want to put behind him.

“Well my plan was very simple, I have come off a decent break, 6 weeks is a long time, especially at the international level. I came mentally fresh, I really enjoyed my batting in the last game as well, against a quality attack,” Kohli said about his performances in the Asia Cup so far.

Before his 59-run knock against Hong Kong, Kohli was India’s joint-top scorer against Pakistan with his innings of 35. He is currently the leading run-getter in the tournament.

“I kind of got the pace of the wicket, I knew my job was to stabilise the innings and build a partnership with whoever I am batting with. In between, when the situation allows, take a risk and hit a boundary every now and then,” he said, while speaking about his approach against Hong Kong.